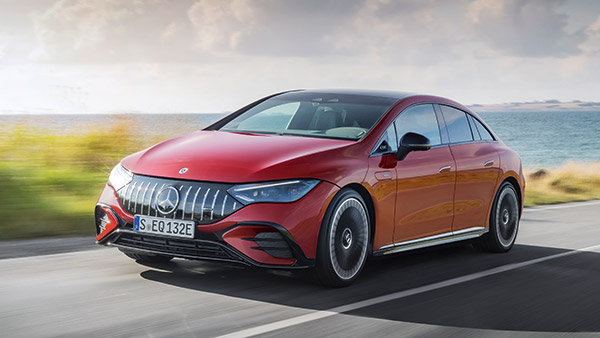 However, seeing a glimpse of this sedan, it seems that this car was worth the wait. Last year, the German automaker unveiled the Mercedes-Benz EQS model, which was Mercedes-EQ’s first electric luxury saloon.

The Mercedes-Benz EQE is powered by two high-output motors specially engineered for the AMG. The mid-size sedan is expected to deliver great performance as one electric motor will power the front wheels, while the other motor has been fitted to the rear wheels.

Mercedes-Benz has made the electric car available in two trims EQE 43 4MATIC and EQE 53 4MATIC+. Both the variants appear to be based on the EQE 350 model in terms of design. However, the performance has been kept quite different for both.

The company claims that the dual motors of the Mercedes EQE 43 together can produce 469 Bhp of power and 855 Newton meters of maximum torque. With this power output, the sedan can easily accelerate to 100 kmph in just 4.2 seconds.

Even this car can reach a top speed of 210 kmph. Meanwhile the Mercedes EQE 53 gets even more power with its dual motors, which can deliver a combined power of 617 bhp and a maximum torque of 950 Nm.

For those who still prefer more punch, Mercedes Benz has also introduced an optional AMG Dynamic Plus package. With this package, the power of the car can be increased to an impressive 677 bhp and 1000 Nm.

Thanks to this power output, the sedan can accelerate to 100 kmph in just 3.3 seconds. The top speed of the Mercedes EQE 53 can also be increased to 240 kmph with the Dynamic Package. Talking about the interior of the sedan, Mercedes has equipped it with many features.

Four-wheel steering is provided as standard in the Mercedes AMG EQE sedan. With this great feature, when a certain speed is reached, all the four wheels of the car turn in the same direction, making the car more stable. Apart from this, the car also gets automatic adjustable suspension for smooth rides.

Especially since the electric car doesn’t have a combustible engine to roar on the roads, Mercedes has also given the option of making artificial sound through the speakers inside and outside the car. Overall, the car gets ARTICO man-made leather upholstery, AMG badges and headlights, which make it premium.