Samsung created a unique Guinness World Record, together 1820 users did unboxing of this phone 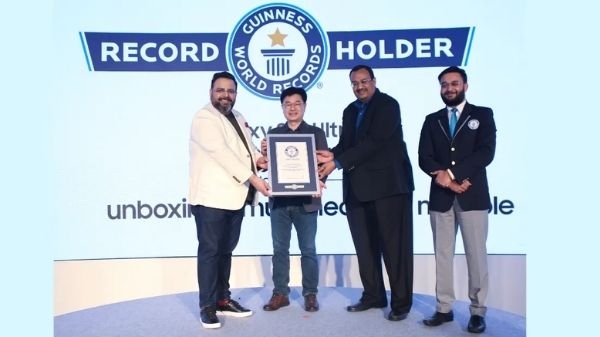 Samsung recently launched its Samsung Galaxy S22 Ultra smartphone, which was waiting for a lot of users. After this it was made live for pre booking and now it has created a new Guinness World Records record in India which is quite unique. Actually, let us tell you that 1820 Samsung Galaxy S22 Ultra smartphones have been unboxed simultaneously in about 17 cities in India. After which it has been given a place in the Guinness World Book Records.

For information, let us tell you that this new unique feat in the name of Samsung was made on March 5, 2022. During this, 1820 users unboxed the Samsung Galaxy S22 Ultra smartphone simultaneously in 17 different cities in India. Let us tell you that the users who pre-booked the phone took part in the event. Due to this, the phone was delivered to these users before the market launch date, after which this unique record has been made.

Thus, this latest Samsung mobile phone Samsung Galaxy S22 Ultra can be pre-booked now from Exclusive Store, Samsung Online Store and Amazon India. While many offers are also being given with it.

Samsung Galaxy S22 Ultra flaunts a 6.8-inch EDGE QHD+ Dynamic AMOLED 2x display. It comes with 120Hz screen refresh rate and 240Hz touch sampling rate. It supports Samsung’s SPen Stylus. Both the Galaxy S22 Ultra smartphone and the SPen Stylus come with IP68 dust and waterproof coating. It also has Corning Gorilla Glass Victus on both the front and back.

In terms of battery life, the Galaxy S22 Ultra packs a 5,000mAh battery that comes with support for 45W wired charging, 15W wireless charging, and wireless PowerShare technology. Connectivity includes 5G, LTE, WiFi 6E, WiFi Direct, Bluetooth 5.2. Apart from this, an ultrasonic fingerprint sensor and NFC have also been given in it. Whereas Samsung Galaxy S22 Ultra comes in White, Black, Green and Burgundy color variants.