Your bike can be stolen in just 30 seconds, you will also be surprised to see the video 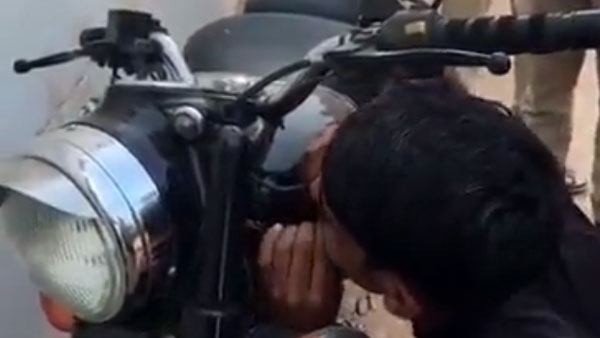 One such video has surfaced on social media, in which a thief has shown a stolen Royal Enfield Classic 350 as a demo. This is done by the thief at the behest of the police and it took him less than 30 seconds to steal this motorcycle.

According to the information, this video is being told of Gwalior city and it is becoming increasingly viral on the internet. This video is from Maharajpura police station of Gwalior, where this thief has given a demo of how to steal a motorcycle at the behest of the police.

The police first verbally asked the thief how he stole the motorcycle. In the video, the thief can be seen standing near a Royal Enfield Bullet and verbally telling that he first breaks the lock of the handle with his foot while sitting on the seat.

After this he told that he starts the bike by tampering with the wiring under the instrument console and in this way the bike is stolen. But his verbal demo didn’t clear the way of the theft, after which they asked him to give a demo on the Royal Enfield Classic 350 parked behind.

The Royal Enfield Classic 350 parked at the rear was fitted with a handle lock. After being told by the police, the thief sat on the seat of that motorcycle and broke its handle lock by pushing with one leg. After which the thief took out the wiring slightly from under the instrument console.

After taking out the wiring, he cut two wires with his teeth and joined them together. After connecting the wire, the thief also showed the motorcycle by electric start, seeing which the police were also blown away. The most surprising thing is that it took only about 30 seconds for that thief to do this process.