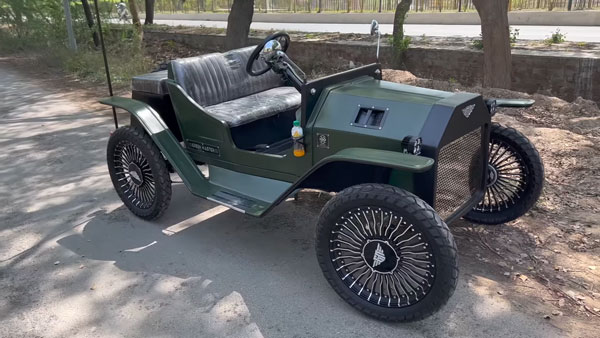 So far, we have given you information about many such vehicles, which have been converted from ICE vehicles to electric vehicles. It’s an electric car for which the manufacturer says they can deliver it anywhere globally. The special thing about it is that its look feels like a vintage car.

Apart from this, another special thing in this is that this vintage electric car has been made using parts from Maruti Alto 800 and Royal Enfield Bullet. This car is made by a company named Green Master in Sirsa and you can buy this car from anywhere in India.

The company has used parts from Maruti Alto 800 and Royal Enfield Bullet because the parts of these vehicles are easily available across India. The car gets keyed Royal Enfield and gets LED headlamps at the front, which are basically aftermarket aux lights.

Apart from this, pilot lights have also been installed from the Royal Enfield Bullet, but instead of halogen, they have been equipped with LED lights. The rearview mirrors installed in this car have also been taken from Royal Enfield. The car gets a front grille finished in chrome with an oval mesh pattern.

The side profile gets 19-inch alloy wheels, which are basically after-market alloy wheels that you find on Royal Enfield motorcycles. There have also been wheel arches, which extend to form a side step like the one we see in vintage cars.

Talking about its specifications, it is powered by a 1200 watt electric motor, which produces only 1.5 hp power and 2.2 Nm torque. Its battery offers a range of around 100 km on a full charge. Talking about the price of this car, you can buy it at an initial price of Rs 2.45 lakh.