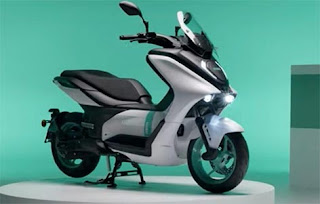 Talking about Yamaha E01, the company displayed it at the Tokyo Motor Show in 2019. According to the information received from there, the company has given 50.4 V, 19.2 Ah capacity lithium-ion battery pack in this electric scooter. An 11 kW electric motor is paired with this battery pack.

According to the reports, the information about charging this scooter with a fast charger is not yet available, but on charging with a normal charger, it gets fully charged in 8 hours.

Once fully charged, this electric scooter gives a range of 80 km. With which three riding modes have been given. In this, the first mode is Eco, the second mode is the normal and the third is the power mode.

Talking about the braking system of the scooter, the company has set up disc brakes in both its front and rear wheels, which is based on the regenerative braking system.

Talking about the design and features of this scooter, the company has made this scooter with a very attractive design. In this, its front has been prepared with a unique design. It has a dual headlamp setup and a compact windscreen.

After its launch in India, this electric scooter is sure to compete with scooters like TVS iQube, Bajaj Chetak, Hero Electric’s Optima.