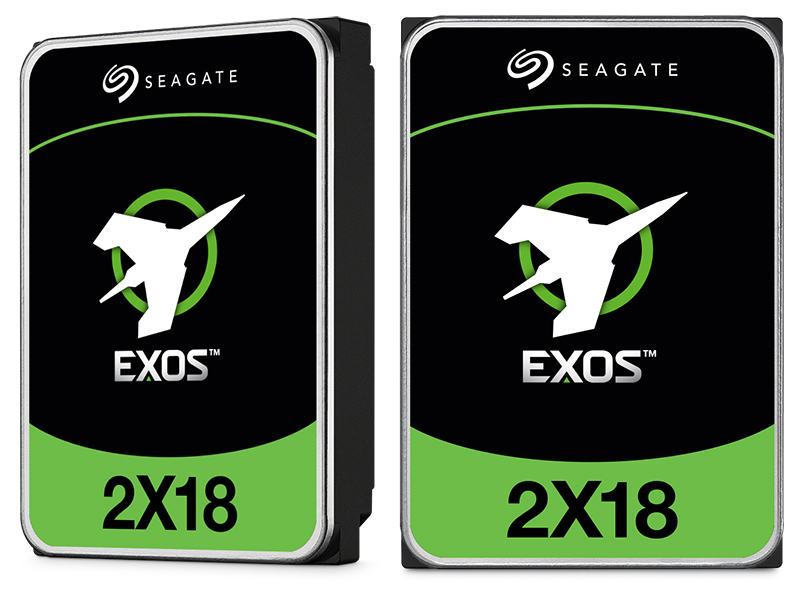 Seagate has expanded its Exos Mach.2 hard drive family to include new models with increased capacity and performance. The new Exos 2X16 and 2X18 hard drives can match the sequential read and write speeds of SATA SSDs. They offer 16TB and 18TB capacities, up from 14TB on the previous generation.

The new Seagate Exos 2X18 family includes two 18TB SATA 6Gb/s and SAS 12Gb/s hard drives and two 16TB drives. SAS drives are always offered with an encryption option. In terms of performance, Seagate claims that the Exos 2X18/2X16 SATA versions have a maximum sustained transfer rate of 554MB/s, while the SAS models are rated for a maximum sustained transfer rate of 545MB/s, making them the world’s fastest hard drives. All four drives also have an average latency of 4.16ms. The IOPS is up to 304 when reading and up to 560 when writing in blocks of 4 KB.

The main benefit of multi-drive hard drives, apart from their higher performance compared to single drive hard drives, is higher sequential and random read performance per TB, which tends to decrease as the capacity of the hard drive increases. Increasing the number of independently operating drives substantially doubles the efficiency, but comes at the cost of increased power consumption. The new Seagate Exos 2X16 and Exos 2X18 hard drives consume 7.8W/8W idle (SATA/SAS) and up to 13.5W/12.8W under heavy load (SATA/SAS) to match a Mach hard drive .2 first generation.

Since Seagate Exos 2X16 and 2X18 drives are primarily intended for data centers, the company does not disclose their prices, as they largely depend on quantity and actual configurations. The new Mach.2 drives are backed by a five-year warranty and designed for 24/7 operation.