Why are these iron discs on these ropes on ships, know what is their work 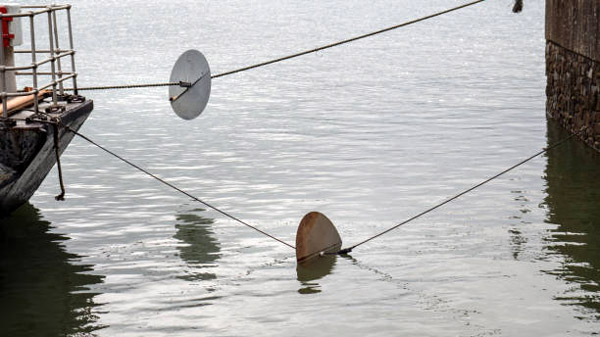 Why for several hundred years ships have been using this strange invention that seems to be useless. These discs are also used on military and civilian ships, on cruise ships and container ships, on small tug boats and giant tankers.

These discs are installed immediately after the ship is moored, the work is not postponed. They usually move freely around the rope and do not have an edge so that the rope is not cut. If the ship’s crew forgets to install these devices, the entire ship may be in danger.

Failure to do so increases the risk of major problems. But the question is why does this happen. Basically these discs act like a rat guard. Rodent is still a major problem in sea ports, which has a history of several hundred years.

Mice are attracted to the warm building, the smell of fish, grains and other food. Of course at every port measures are taken to control the rodent population. They are poisoned, hunted and some other methods are used to prevent them from settling in the harbor area.

However, rats on board the ship are even more dangerous. During the journey the crew has limited resources and the rats cannot be sacrificed to satisfy their hunger. In addition, rats also bite into ship’s wires or hoses, which can be a major safety issue.

Apart from this, rats are also prone to sanitation problems and infectious diseases. In such a situation, bringing rats on ships can prove to be a big danger. This disc on the mooring lines is the only thing that is installed between the ports and the ship to prevent the rats from boarding the ships.

Sure, rats can swim, but there’s virtually no way for a rat to climb the steep, wet steel hull. But mooring lines provide ample grip and are a fairly comfortable way for rats to board the ship. That’s why these Rat Guards are used.

These discs usually spin freely around the rope, which means that the rat will fall while attempting to climb them. Sometimes additional measures, such as a slippery plastic sleeve, are used. Rats can jump, so you rat guards are not fitted too close to the moor or hull.