Which Realme smartphone has the best camera in terms of quality: a detailed test 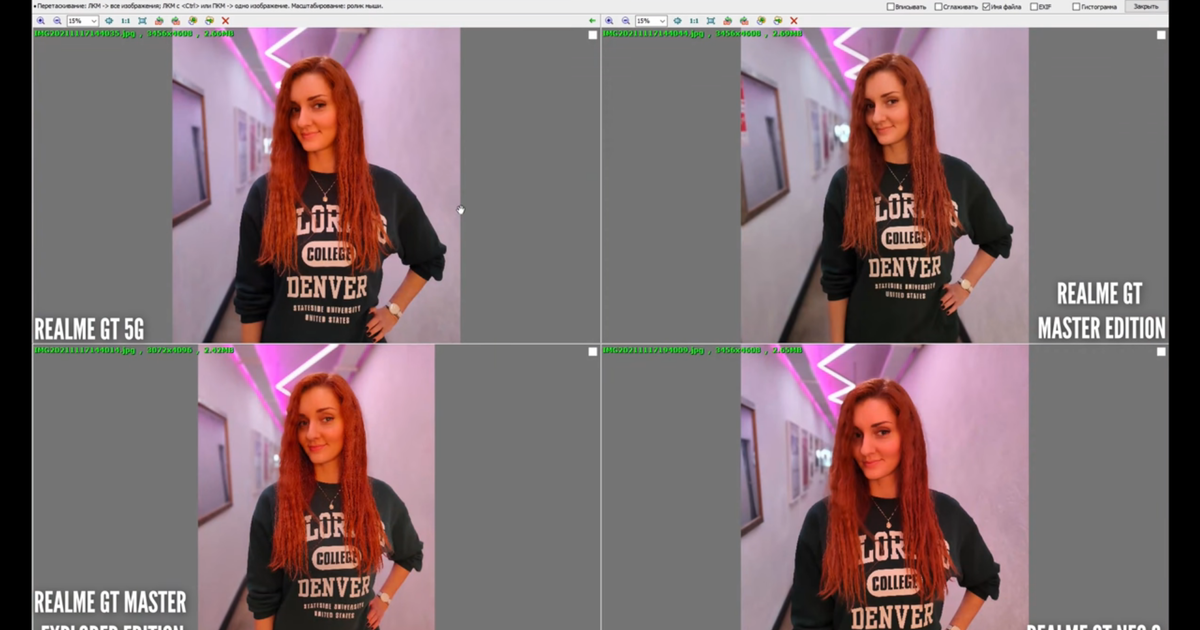 The author of the channel, Philip Belikov, tested the functions and quality of photo and video shooting with the Realme GT Neo 2, Realme GT Master Edition, Realme GT Master Explorer Edition and Realme GT 5G devices. Pictures and videos were evaluated in various conditions: in daylight, natural lighting, and in the evening and at night.

The first item was video filming… A darker image when shooting with the front camera is obtained on the GT 5G and Master Edition. The picture is brightest on the Explorer Edition and GT Neo 2, but the sky behind them is quite highlighted. None of the devices could show the background qualitatively.

In Full HD 30 fps, highlights are noticeable on the Realme GT Neo 2 on the main camera, while the Master Edition does an excellent job with them. As for the color rendition, of all the Master Editions, it produces an image with a more violet (colder) tint. Stabilization also works worst on the Master Edition. In general, in terms of the quality of daytime shooting, all smartphones are on the same level.

Indoors, when shooting neon signs, the Master Edition does the worst. Other devices give approximately the same picture, although the expert still singles out the expert here as the best Explorer Edition. The darkest image comes out on the GT Neo 2, and the Explorer Edition is again in the lead in stabilization.

In the evening and at night conditions, the image on the Master Edition turns out to be rather dark, without glare, with a cold undertone. A warmer and brighter picture comes out on the Master Explorer Edition. The GT Neo 2 and GT 5G provide the most natural colors.

Video from a wide-angle camera in the dark for all devices is not very good in quality. There is a lot of noise, poor detail (although the Explorer Edition has a slight advantage in this regard). But the viewing angle here, as the presenter notes, is most successful on the GT Master Explorer Edition.

When shooting with magnification, the Master Explorer Edition turns out to be better than the others in detail and in stabilization.

At 4K 60fps, the frame is heavily cropped on the Realme GT 5G. On the rest, everything remains the same as before. It stands out strongly in color reproduction due to the yellowish tint of the image here in the Master Explorer Edition.

In general, during the day, the videos are approximately the same for all smartphones. Although in terms of stabilization and operation of the wide-angle camera, according to the presenter, the GT Master Explorer Edition still stands out in such conditions. In the evening and at night, the GT Neo 2 loses in terms of the dynamic range. At the same time, if you do not pay attention to minor differences, then all the devices produce a similar picture in the video.