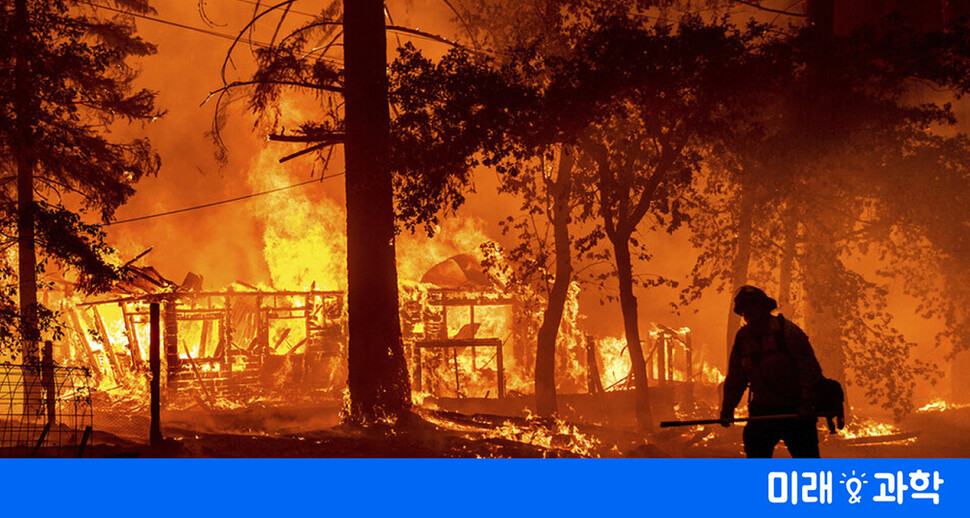 A firefighter walks past the fire site where a large wildfire named ‘Dixie’ is burning a house in Plummouth County, California, USA on July 24 (local time). In 13 states in the western United States, extreme drought and heat waves overlapped, causing more than 80 wildfires to spread to surrounding areas. yunhap news

A major cause of unprecedented large-scale wildfires in the western United States is climate change caused by human activities, a US research team said on the 2nd (Korean time). In a paper published in the journal Science Journal (PNAS), a research team at the University of California at Los Angeles, in the US, said, “The average annual average of 13,500 km2 of wildfires in the western United States between 2011 and 2018 was due to the rapid increase in conditions that could cause fires. , found that the cause was anthropogenic climate change rather than natural variability.” The area of ​​wildfires during this period doubled compared to 1984-2000 (DOI: 10.1073/pnas.2111875118)

The research team used the concept of ‘vapour pressure deficiency’ (VPD), which indicates how dry the air is, to determine the cause of the recent wildfire spike. VPD represents the difference between the amount of water actually present in the atmosphere and the maximum it can hold. The larger the VPD, the less water vapor pressure, the more water escapes from the soil and plants into the atmosphere, drying out and creating conditions that are prone to fire. The research team concluded that the sharp increase in wildfires in the western United States was related to VPD during high-temperature seasons such as spring and summer. The number of days with high VPD increased by 94% from May to September 2001 to 2018 compared to the previous period, the research team said. When the research team analyzed the causes of this increase, they found that natural fluctuations in the atmosphere only contributed to 32% of the increase in VPD. According to the team’s calculations, 68% of the increase in atmospheric water scarcity over the past two decades was due to global warming, mainly due to human activity. The research team said, “Before 2000, VPD could be explained quite well using only weather changes, but now VPD alone can explain only 30%,” the research team said. The research team added that the climate model ‘Junctional Great Circulation Model 6’ (CMIP6) shows that 88% of the VPD deviation can be explained by anthropogenic global warming. Global warming was responsible for 50 percent of the unprecedentedly high VPD, the team said, when the worst wildfire ever recorded in California, burning an area of ​​4,200 square kilometers in August last year, the team said. Reporter Lee Geun-young [email protected]