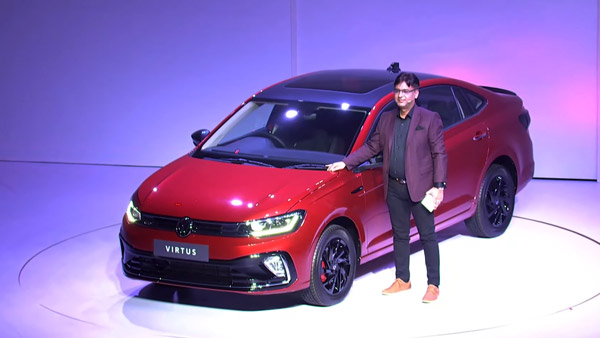 The Volkswagen Virtus gets a dual-slat grille at the front, along with two projector headlights with LED DRLs. A large air dam and halogen headlights are seen in the front. On the side, dual tone alloy wheels, a shark fin antenna, door handles with chrome inserts, black ORVMs have been given.

Talking about its rear part, LED tail light has been given in it and it looks very attractive from the back. It will be brought to the GT Line trim and will be given a ‘GT’ badge on the front fenders. The Vertus measures 4,482 mm in length, 1751 mm wide, 1472 mm high which is 92 mm longer, 52 mm wider, 5 mm higher than the Vento. Its wheelbase is to be kept at 2651 mm, which is 98 mm more than that of the Vento.

Talking about the safety features, 40 safety features have been given in it. It gets 6 airbags, electronic stability control, electronic differential system, multi-collision brakes, rear parking camera, ISOFIX child seat mount, tire pressure monitoring system, ABS, EBD, front and rear parking sensors. The company is going to bring it in a total of 6 color options.

Volkswagen Virtus will be launched in two variants Dynamic Line and GT Line. It has been built on the company’s MQB A0 IN platform, it is going to be the fourth model under the company’s India 2.0 project. As such, its features and equipment are inspired by Skoda’s Slavia. Along with this, the safety features and engine options have also been kept like this.

The Volkswagen Virtus is a luxurious sedan that is about to be the longest in its segment. Along with this, care has been taken from the comfort to the safety of the customers, now it has to be seen how it gets booking and by when it will be launched.

Confirm Ticket will be available every time from IRCTC, just click this option while booking Tatkal