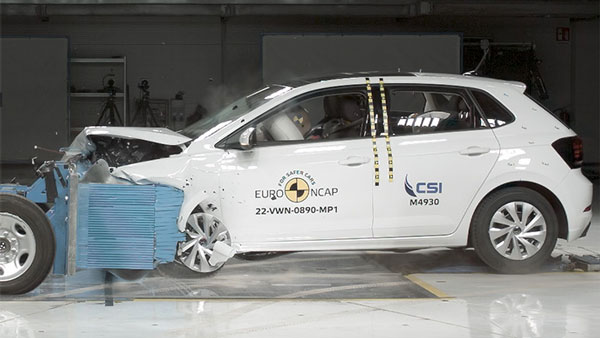 Apart from this, the car has scored 70 percent in vulnerable users and safety assist features. The body shell of the Volkswagen Polo was rated stable and there was good protection for both the front occupants’ knees and the women’s.

Volkswagen said about this that people of different sizes and people in different positions will also be well protected. Even in full-width rigorous obstacle testing and side pole impact testing, the Volkswagen Polo provided decent protection for all critical areas of front and rear people.

Global NCAP also appreciated the fact that the Volkswagen Polo has measures in place to prevent injuries. For example the head restraint provided good protection for the front and rear people. The car also applies brakes immediately after impact to avoid another collision.

Lastly it will also call emergency services in case of an unfortunate incident. The current Volkswagen Polo based on the PQ25 platform has scored four stars in the Global NCAP safety tests in India. Volkswagen Polo is being sold in the Indian market for the last 12 years.

But now this car will be updated for the Indian market and Volkswagen’s brand director, Ashish Gupta has indicated that the next-gen Volkswagen Polo model may be launched next year.

It is worth noting that the company is going to launch a new mid-size sedan in place of the Volkswagen Vento, but the Volkswagen Polo can also be discontinued along with it. The company has not given information about whether a new model will be brought in place of Polo or not.

Volkswagen is set to make several changes to its Indian lineup in the coming months with a number of models being added. The company is bringing new models for the Indian market under a new plan, which includes updates to existing models along with new models.