Vivo X90 Pro+ Red Leather Edition teased in China; May be launched on this day 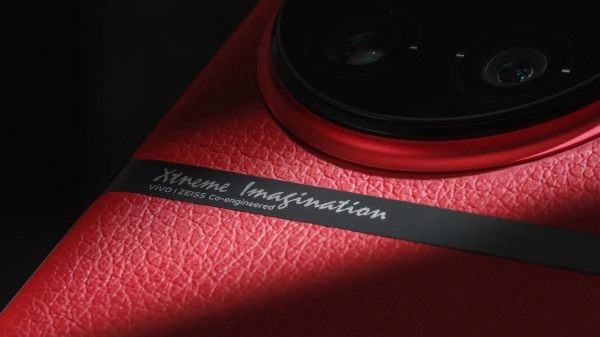 The teaser image gives a good look at the rear panel design. The phone will launch in a red color option, possibly with a fake leather skin. We can also see the circular camera module sitting atop the rear panel. There is also a thin horizontal stripe running down the rear panel with the text “Extreme Imagination” over the Vivo and Zeiss branding.

Hours after the company officially released the teaser, live photos of the Vivo X90 Pro+ 5G have been leaked, suggesting that the flagship may launch soon. The image shows the circular camera module resting on the rear panel in red color. It also flaunts the Zeiss branding on the right, with the LED flash module on top. The front of the device could sport a curved AMOLED display with a hole-punch cutout at the top centre. We can expect the phone to sport thin bezels all around the display

The upcoming Snapdragon 8 Gen 2 SoC can be seen in the phone. It will have a 6.78-inch Super AMOLED display with 120Hz refresh rate support. The phone could launch with a 5000mAh battery as well as 100W fast charging support out of the box. The X90 series is also said to feature the Dimensity 9200 SoC, which was launched on November 8. The new MediaTek flagship SoC could be part of the Vanilla X90.

The new 50MP Sony IMX989 1-inch camera sensor on the X90 Pro+ 5G is also found in the Xiaomi 12S Ultra. The upcoming Xiaomi 13 Pro is also likely to have the same sensor. According to rumours, Vivo will also launch the phone with a 50MP portrait sensor and 64MP OmniVision OV64B telephoto camera sensor. The telephoto camera will capture 16MP images using 3-exposure staggered HDR and 4-in-1 pixel binning.