Viral Video: 10,000 firecrackers planted in the car, know what happened then? 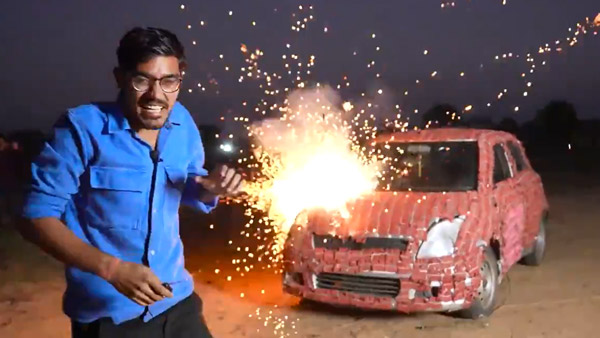 Actually YouTuber, Amit Sharma is quite famous for making many types of videos on his channel. He has recently recorded such a video, which you will be surprised to see.

Famous YouTuber Amit Sharma burst more than 1 lakh firecrackers on the car and made a full video of it. Amit Sharma, YouTuber posted this video on his ‘Crazy XYZ’ channel just a day before Diwali from C. They set several firecrackers outside the automobile, as shown in the video.

How did he actually do all this?

After this, Amit Sharma set the car on fire with the remote. Drone cameras, Go-Pro cameras and other cameras were installed from multiple angles by Amit Sharma and his colleagues to record the entire incident of how one lakh crackers were lit. Even after the firecrackers were extinguished for a long time, the sound of explosions continued.

When all the windows of the car were white before the firecrackers exploded. All of which turned black despite the fact that the hood of the car looked perfect. However, no significant damage was noticed in the car.

Despite the incident the car’s battery was perfectly fine, ‘bubbles’ appeared on the paint. Amit Sharma tried to drive the car by bursting all the firecrackers. The car took a while to start, but after a while it started. However later it closed again. Now this video has been removed from YouTube channel. It was not disclosed why it was removed.

However, this is not the first case of making such videos. YouTuber keeps making videos like this. Many videos will be seen on his channel doing such acrobatics. On the occasion of Diwali, sky shot on the car on his channel can be seen doing many tricks on the car with firecrackers.