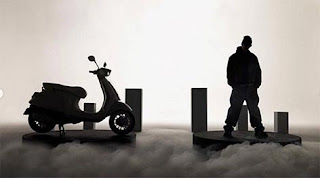 The Italian two wheeler manufacturer is known for its attractive and unique designed scooter, whose scooter is also very much liked in India.

The most special thing about this scooter is that its design has been prepared by Justin Bieber himself. These scooters look similar to the company’s existing scooter Vespa, but a lot has been changed in their design and graphics.

Another feature of the three variants of the Justin Bieber X Edition scooter is that the scooter with these three engine variants has been made by Justin Bieber with only white color theme, which gives this scooter the look of a premium scooter.

In the braking system of the scooter, the company has given disc brake in its front wheel and drum brake in the rear wheel. With which a 12-inch alloy wheel has been added with which the tubeless tyre will be fitted.

Talking about the features of the scooter, the company has completely used LED lighting in the headlamp, tail lamp, and turn indicator. Apart from this, features like digital instrument console, digital trip meter, digital speedometer, smartphone charging USB port can be given in this scooter.

The company has not made any official announcement regarding the price and launch date of this scooter, but according to experts, the company can launch this special edition scooter in the market with an initial price of Rs 1.5 lakh.