Varun Dhawan challaned in Kanpur, was driving a motorcycle without wearing a helmet 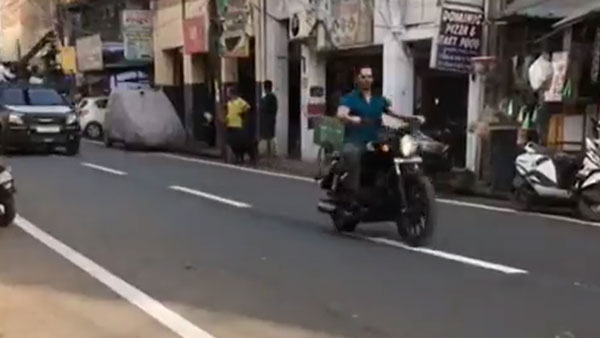 Giving information about this, Kanpur DCP Traffic said that actor Varun Dhawan was riding without a helmet, so the police has issued his challan as per the law. Reportedly, the registration plate of the bike Varun Dhawan was driving was also not correct.

In such a situation, he had violated the traffic rules. The police is currently examining the registration plate and if any discrepancy is found in it, then another challan will also be issued. This is not the first time this has happened to him, Varun Dhawan has also come into the limelight for breaking traffic rules.

Several years ago, the Maharashtra Police had challaned him for posing with his fans in Mumbai. Varun Dhawan was challaned by the police after his picture clicked with a fan went viral. Both were in their respective vehicles and Varun stepped out of his Audi Q7 to take a selfie.

It all happened when the traffic signal was red and the cars were waiting. For information, let us tell you that the traffic police in most of the metropolitan cities have now created a network of CCTVs, which are closely monitored by a team of police personnel.

With the help of these CCTVs, the police track the registration number and challan on the basis of violation. However, many online challans turn out to be incorrect due to a bad number plate. But if we want we can challenge wrong challan through redressal portal of traffic police.

In recent days, the government and officials have worked to increase the amount of the challan. The increase in fines has been done to reduce the number of violations and to make the roads safer. India is one of the countries with the highest number of road accidents in the world and has a high proportion of fatal accidents.

Many drivers in India lose their lives due to reckless driving on the road and not following the traffic rules. The police have also started cracking down on vehicles which do not have rearview mirrors or are not used.