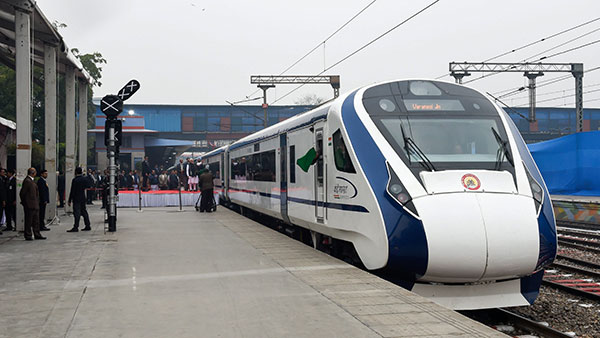 Vande Bharat Express is India’s first engineless train. Earlier, the engine coach was installed separately in Indian trains, but now in this train the engine has been added together as is usually seen in metro or bullet trains. Because of this it can achieve more speed than a train like Shatabdi. Its top speed has been limited to 130 km/h.

Its top speed may have been limited to 130 km/h but it is capable of achieving a top speed of 200 km/h. During its trials, this train had achieved a speed of 180 km / h, which is the highest speed achieved in any train trial across India so far. Due to the capacity of the rail tracks on the route on which the Vande Bharat Express is run, its speed has been limited.

3. Wi-Fi facility in the train

In view of the problem of sanitization during train travel, Bio-vacuum toilets have been provided in Vande Bharat Express, which includes both Indian and Western toilets. At the same time, touch free bathroom fittings have been given keeping in mind the cleanliness, so users can use it without any worry. There will be no discharge of any kind in it.

Fully controlled automatic doors have been given like Metro, in such a situation any kind of accident can be avoided. Along with this, all 16 coaches of Vande Bharat Express come with AC facility, no coach without AC is available in this train. The coach of the train is divided into economy and executive class.

In this train, two coaches of executive class are available in which 52 seats have been given in each. The seats are rotated 360 degrees and so you can position the seat in the direction in which you are traveling. This facility is available only in executive class seats. In economy class, 78 seats are provided in each coach.

Keeping in mind the security, many facilities have been provided in Vande Bharat Express which include CCTV. With this, monitoring can be done during the journey so that immediate action can be taken in case of any kind of accident. At the same time, emergency talk-back units have also been provided to contact the train crew.

The driver’s cabin at either end is aerodynamically designed to allow for faster turnaround at the destination. At the same time, regenerative braking system is used in it so that power can be saved. While motors have been provided in every other coach for faster acceleration and deceleration, it also ensures equal allocation of power.