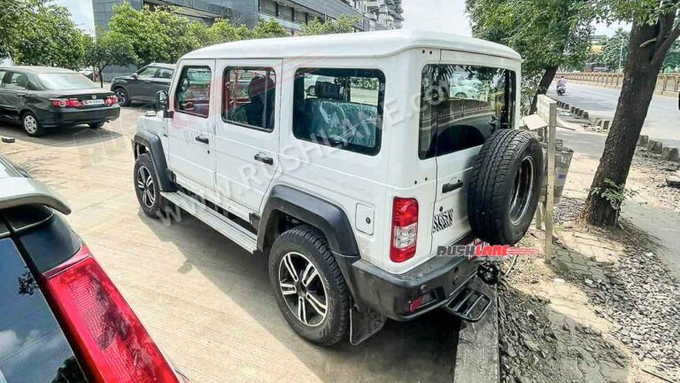 Force gurkha 5 door: Force Motors may soon bring 5 door Gurkha SUV. Recently its spy pictures have surfaced. The special thing is that 9 people will be able to sit together in it.

Force Gurkha 5 Door Launch: The new Force Gurkha SUV was brought to compete with the Mahindra Thar. This car, which came in 3-door version, has not been very successful in doing so. It also did not have the option of a petrol engine and automatic transmission. But now the company is going to bring its 5 door version, which many people are telling as the desi G-Wagon. The special thing is that 9 people will be able to sit together in it.

Glimpse of the SUV revealed
Talking about the current Gurkha, its length is 4116mm, width is 1812mm and height is 2075mm. While it has a wheelbase of 2400mm. As per Rushlane’s report, the length has been increased in the new 5-door Gurkha, which will provide one more row to sit on. Overall it is going to be more practical now.

The width is also likely to increase as the top-spec 5-door version could get 18-inch alloy wheels with bigger 255/60-R18 tyres. As can be seen in the leaked images, smaller steel wheels can be found in the lower variants. Earlier it was seen in the pictures that there were captain seats in the third row. Talking about the exterior, it will get features like circular LED DRLs around the headlight, bonnet mounted indicators, boot mounted spare wheel, rear washer wipers, a snorkel and roof mounted carrier.

Launch Details and Expected Price
Force Gurkha 3-door was launched in September 2021 at Rs 13.59 lakh. In 2022, Force Motors increased the price by Rs 51,000 to Rs 14.10 lakh. We expect the Gurkha 5-door to cost around one lakh more than the 3-door model. The Force Gurkha 5-door will take on the upcoming 5-door Thar and 5-door Jimny. The company can launch it in the coming months.