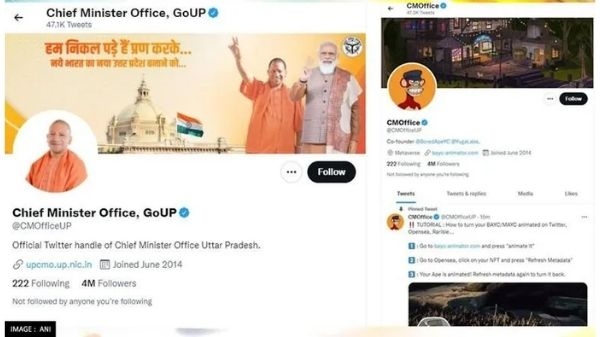 The official Twitter account of Uttar Pradesh Chief Minister Yogi Adityanath’s office (CMOfficeUP) was hacked on Saturday, 9 April. After about 4 hours, the account was partially restored and the posts posted by the hackers on the account were removed.

An FIR has been registered in this regard under relevant sections of the IT Act against unknown persons at the Cyber ​​Police Station of Lucknow. The matter will be investigated by a team of experts from the DGP’s office.

The UP government tweeted that after the investigation of the matter by cyber experts, strictest action would be taken against those responsible.

For information, let us tell you that after hackers hacked the official Twitter of UP CM’s office, about 400 to 500 tweets were made from the account. The hackers also removed the display picture of the Chief Minister from the Twitter handle.

At the same time, a government official said, “The account was hacked for about 29 minutes in the night. The hackers posted around 400-500 tweets.”

However, now the account has been recovered and the profile photo has also been changed again.

Let us tell you that after hacking the account, the hacker had put the profile photo of @BoredApeYC on the account and made many tweets related to NFT.