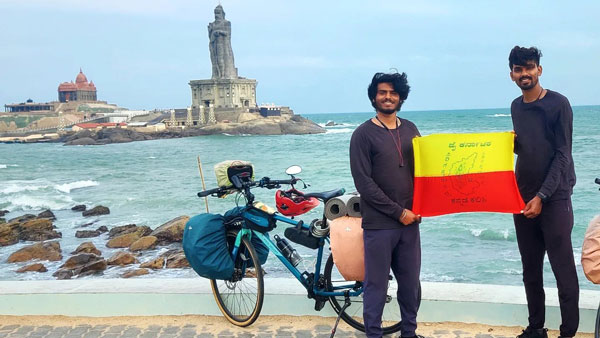 They went on this cycle ride to spread awareness about global warming and the importance of education for all. He started his cycle ride on July 11, 2021 to travel across 24 states and four union territories.

Both these riders had returned to Bengaluru on March 12, 2022. Both are currently applying for the Guinness World Record for longest cycling tour as a team in the same country. Regarding this, Dhanush said, “When we came to know that the current record of a team is around 19,400 km, we decided to beat it.”

Over a span of 245 days, the duo faced extreme rain in Siliguri, snowfall in Himachal Pradesh and scorching heat in Rajasthan. “But we got to see some of the most spectacular views. We experienced our first snowfall,” Dhanush said.

He further added that “not only that, we even tried dishes that we had never heard of before.” Dhanush, 23, quit his job in the government health sector to make this journey a reality. Dhanush said that “Initially, we were just a group of young people who wanted to go on a cycle tour across India.”

He further added that “but we felt we could use this as an opportunity to shed light on important topics.” According to the information, he had visited more than 20 government schools and colleges on his visit.

In addition he discussed with the local people the growing concern about global warming, climate change and the need for equal education for all. Hemantho said that “it was a life-changing experience, at least for me. When we told people we were going on this journey, no one believed us.”

He further added that “No one wanted to fund our ride. Why would they? We were two youngsters who didn’t even have their own bikes. But that didn’t stop us.” A farmer by profession and a native of Yadagondanahalli in Bengaluru Rural, Hemant stresses on the need to lead an active life.