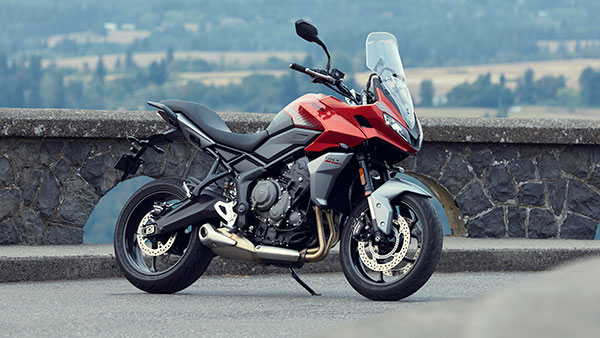 The company will start deliveries of the new Tiger Sport 660 in April 2022 and during this time test rides of the bike will also be made available at select dealerships. Tiger Sport 660 is an adventure tourer bike that has been introduced in a sporty avatar. A lot of features have been given in the bike along with new technology.

In terms of adventure tourer bike, it has been given aerodynamic design. The front and rear of the bike have been kept slim to reduce the air pressure while driving. The bike gets dual tone side body panels, under belly exhaust and semi-faired design. It gets split dual LED headlamps, a large transparent windscreen at the front, LED tail lights and single piece seats.

The bike gets dual disc brakes at the front and single disc brakes at the rear. Apart from this, there is an upside down telescopic fork at the front and monoshock suspension at the rear. Side and rear luggage boxes have been made available as accessories for carrying luggage while riding. Apart from this, a wrist guard has also been given on the handle.

Talking about other features of the new Tiger Sport 660, it has been given TFT instrument console, Bluetooth connectivity, two riding modes (rain and road), traction control and switchable ABS. This bike uses the chassis of Triumph Trident and is built on the same design platform.

Coming to the engine, the new Tiger Sport 660 uses a three-cylinder 660cc liquid-cooled engine. This engine generates 81 bhp power and 64 newton meter torque. The engine is mated to a 6-speed gearbox and optional up/down quickshifter. This is the first bike of this engine capacity in which a three-cylinder engine has been given and it is also the most powerful bike of 660cc.

The new Triumph Tiger Sport 660 will give tough competition to the Kawasaki Versys 650 and Suzuki V-Storm 650 XT in India. Triumph Motorcycles is celebrating its 120th anniversary in 2022. The company sold its first bike in 1902.