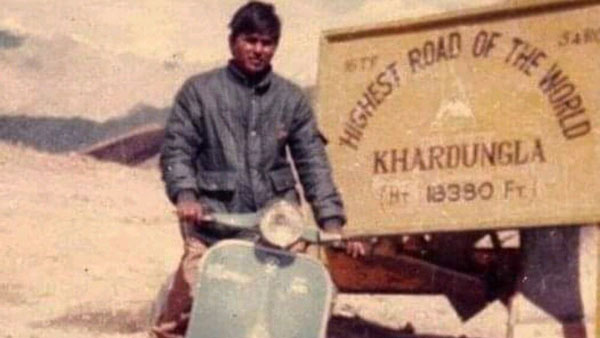 To go to Khardungla, Raj Krishna chose his Bajaj Chetak scooter, which was a very popular scooter at that time. He started his journey from Hisar and reached Leh in 16 hours via Zojila Pass. He told that due to lack of oxygen in Leh, he had to face a lot of trouble in the journey.

However, even after reaching Leh, his journey till Khardungla was not easy. They had to get permission from the security guard to go to Khardungla, which took them two days and during this time they were staying in Leh, which is one of the coldest areas in the world.

After getting permission from the security guard, he reached the world’s highest road in Khardungla on his Bajaj Chetak scooter. Raj Krishna has also shared a picture of himself posed on the top of Khardungla, in which he is seen with his Chetak scooter.

He traveled 734 km from Bajaj Chetak to reach Khardungla. During this, he drove the scooter continuously for 42 hours. Krishna tells that he is 60 years old now but this experience gives him happiness even today.

Leh is known for the harshest and most inhospitable terrain in the world. The weather here is very cold and there is a severe lack of oxygen in the air, which makes traveling here even more difficult. Nowadays people from all over the country like to go to the high peaks of Zojila and Khardungla for adventure.

The Bajaj Chetak scooter was launched in 1972 and was in production for 34 consecutive years before being discontinued in 2006. During this time, the company had made many changes in the scooter but there was no shortage in the thrill of driving it.

Bajaj Chetak used to come with 145.45 cc 4-stroke petrol engine. In 1972, the first lot of 1,000 Chetak scooters was launched in the market. During this time its price was between 8 thousand to 10 thousand. For the first time in 1977, Bajaj Company sold 1 lakh Chetak scooters. Initially the booking period of the scooter was about 3 months, later there was a time when people had to wait for 20 months to get the Chetak.

In 2002, the price of Chetak was about 27 thousand rupees and by 2006 this price had reached 31 thousand. Till 2002, Chetak used to come with 2-stroke 145 cc engine but later its engine was changed and it was available in the market till 2006 with 4-stroke 125 cc engine. Even today old models of Bajaj Chetak are present with some enthusiasts.