Transport Minister Nitin Gadkari reached Parliament in a hydrogen-powered car, know the features of this car 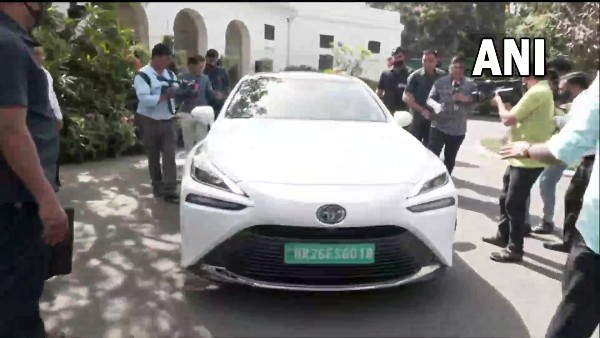 Gadkari further said that “This car is a pilot project. Now production of green hydrogen will be started in the country, exports will be stopped and new work opportunities will be generated from it.” The Toyota Mirai is the world’s first electric car to run entirely on hydrogen. The car has been launched as part of a pilot project undertaken to test the feasibility of hydrogen based Advanced Fuel Cell Electric Vehicles (FCEVs).

He further said that “Government of India has started a mission of 3000 crores and soon India will become a country which will send out Green Hydrogen. Green Hydrogen will be used where coal is being used.” The next generation model of the Mirai Hydrogen car will be completely manufactured in India. It will be manufactured at Toyota Kirloskar Motors’ plant in Karnataka. Let us know that the concept model of Toyota Mirai was introduced in the year 2020.

The hydrogen tank of Toyota Mirai can be completely filled in just 5 minutes. It can run for 646 km on full tank hydrogen. Like electric vehicles, the hydrogen-powered Toyota Mirai produces zero emissions. The Toyota Mirai sedan comes with a high pressure hydrogen fuel tank.

The engine of this car converts the energy generated by the reaction of hydrogen and oxygen into electricity, which gives energy to the electric motor in the car. This reaction generates water vapor that escapes through the exhaust pipe of the car. According to the Ministry of Road Transport and Highways, transportation powered by green hydrogen is going to be an important technology option of the future, especially as it is best suited for cars, buses, trucks, ships and trains and medium to long distance vehicles. is applicable.

Sales of electric vehicles in India are growing rapidly and a network of charging stations is also being developed for this. The Union Minister for Transport and Highways Nitin Gadkari, in a written reply to the Rajya Sabha, informed that more than 10.60 lakh electric vehicles have been registered in the country. Sharing the data of the charging network, he said that 1,742 charging stations are operational in the country.

Gadkari said that the contractors have been directed to provide charging stations on the highway as a roadside facility. He informed that the National Highways Authority of India (NHAI) is developing 39 such projects where fast charging facility will be available along the highway for electric vehicles.

Replying to another question, he said that an amount of Rs 20,268.45 crore and Rs 1,189.94 crore has been sanctioned for projects under Central Road and Infrastructure Fund (CRIF) and Inter-State Road Projects (CRIF) respectively. These projects will be completed within three years.