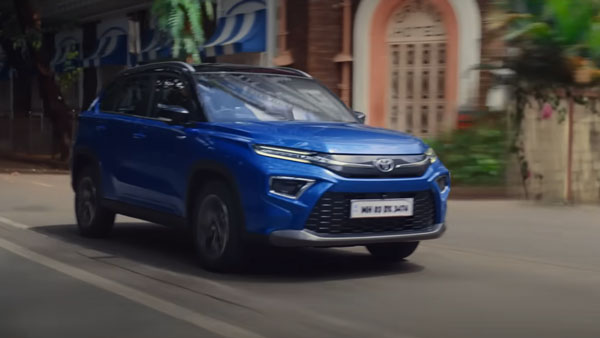 The SUV will be produced by Toyota at their Bidadi plant in Karnataka. Toyota will announce the prices for the SUV next month and deliveries will also begin in the coming months. Now Toyota has released an official TVC for the all-new Toyota Urban Cruiser Hyryder SUV.

Toyota India has shared this video on its YouTube channel. In this video the Urban Cruiser Hyryder is compared to a man who is leading a hybrid lifestyle. He is working like any other person and at the same time following his passion.

The Toyota Urban Cruiser Hyryder is also like the person seen in this video. The company gives this SUV a regular petrol engine and also gets a robust hybrid system, which will provide an EV-like experience to the driver. The owner does not need to recharge the batteries like EV.

It also charges itself when the car is being driven in petrol mode. The exterior design of the Toyota Urban Cruiser Hyryder is quite different from other SUVs in this segment. It gets some design elements that make you look like Toyota SUVs sold abroad.

The SUV comes with twin LED DRLs, split headlamps with projector LED lights, muscular bumpers, unique crystal acrylic front grille with chrome garnish. The front fascia is quite aggressive with corner-to-corner chrome separators. The grille has been given a black finish and merged with double layers of LED DRLs.

The front bumper has a long air dam, which is surrounded by LED headlights. The ‘hybrid’ badge just below the wing mirrors signifies its powertrain options. The Toyota Hyryder SUV gets 17-inch alloy wheels, black colored A-pillars and a floating roof.

Coming to the rear, there are C-shaped taillamps that extend to the upright tailgate along with dual C-shaped LED parking lamps. There is a clear chrome stripe at the centre, merging the Toyota logo with the taillamps.

The new Urban Cruiser HyRyder will be powered by Maruti’s 1.5-litre K15C petrol engine with mild hybrid (for the lower variants) and strong hybrid system (for the higher variants). Its mild version will churn out 103 Bhp of power and 137 Nm of torque, while the stronger hybrid setup will make 116 Bhp of power.