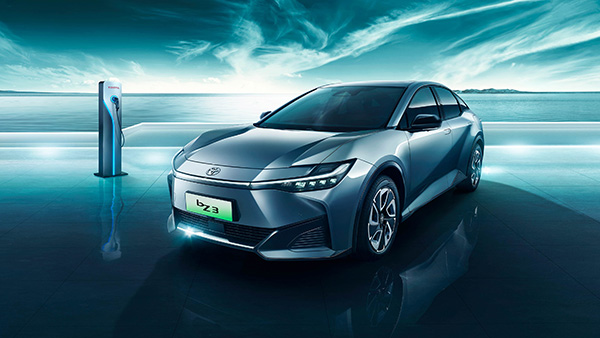 The Toyota bZ3 will be sold by FAW Toyota in the world’s largest electric vehicle market, a collaboration between Toyota and Chinese firm First Automobiles. It enlists the help of over 100 Toyota engineers to ensure design, production, engineering and quality.

The Blade LFP battery pack is provided by BYD. Toyota claims that the new bZ3 car will get a range of over 600 kms on a single charge. The battery is designed with cooling control and safety in mind. Toyota says that the bZ3’s battery pack will retain 90 percent of its capacity even after 10 years.

BYD has also provided the ‘TZ200-XS002’ motor in the Toyota bZ3 which powers the car. The presence of this motor was revealed by China’s Ministry of Industry and Information Technology in a listing of the bZ3 earlier this year.

In terms of design, the bZ3 sports a hammerhead shark-like front design. This design has also been seen on bZ4x. Other design specifications of the bZ3’s exterior include flat door handles, aluminum wheels and a rear bumper to reduce wind resistance.

The interior of the Toyota bZ3 features a large portrait-oriented infotainment display that controls most of the functions of the electric car. A small driver’s display is found on the dashboard behind the steering wheel.

The company has recently released the first teacher of Toyota Innova High Cross. It will be launched in the coming months. Its look can be seen in the teaser. The upcoming MPV gets a hexagonal grille which is similar to that of the Toyota Corolla Cross. It has been given a large headlight and the upper part of the main headlight has been kept in the L shape. Lines and creases have been given on its bonnet which gives it a strong look.

The bZ3 car is the second car from the Japanese firm’s bZ battery electric vehicle lineup. Which will be for China only. The electric car is expected to make its debut in international markets like Europe by 2024.