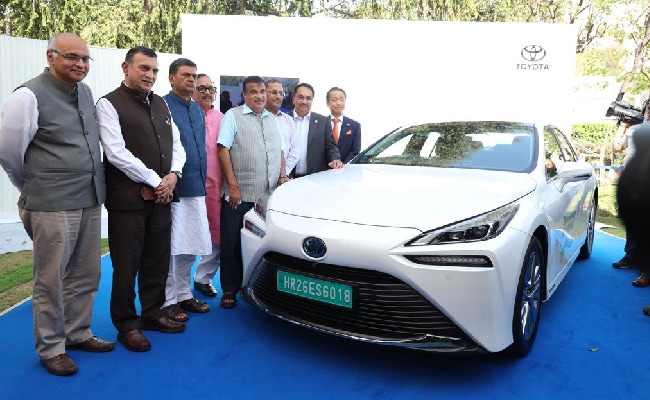 While on one hand the world is moving towards electric vehicles without considering petrol and diesel as eco-friendly, on the other hand many studies are proving that even electric vehicles do not fully support green energy. In such a situation, vehicle manufacturer Toyota has developed a hydrogen fuel cell-powered car, which will not only give a longer range, but it is also being said to be good for the environment. This car named Toyota Mirai has now been brought to India, which has been presented by the Union Minister of Road Transport and Highways Nitin Gadkari himself.

Toyota Mirai is India’s first FCEV (Fuel Cell Electric Vehicle) car. The Union Minister unveiled the country’s first FCEV and also announced a new research and development project. This team will try to test and analyze vehicles based on hydrogen fuel cells in India. This pilot project will be run in collaboration with the International Center for Automotive Technology (ICAT).

Regarding the Mirai, Toyota claims that this car can deliver a range of 650 km with a full tank. It is said that this car is completely eco-friendly and does not emit any other emissions except water. The biggest problem with electric vehicles is the long charging time, but Mirai eliminates this problem, as it doesn’t take long to refill hydrogen.

The Union Minister also highlighted how hydrogen can be obtained sustainably in India through multiple renewable sources and abundantly available biomass. Certainly the hydrogen fuel cell based transportation system brings many benefits and will help in opening a big way for the low-carbon energy of the future. The Indian government is also exploring opportunities to make many sectors carbon free, including road transport.