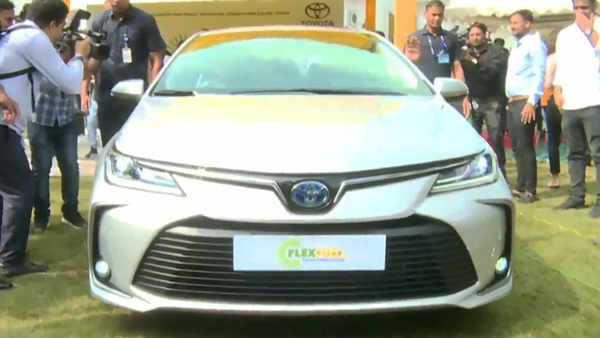 Let us tell you that Toyota has introduced the Corolla Altis with flex engine under a pilot project. The Government of India is promoting hybrid and alternative fuel vehicles in the country to reduce the import of crude fuel and curb vehicular pollution. This is the second time that Toyota has introduced an alternative fuel-powered vehicle in the country.

Earlier, Toyota had launched the Toyota Mirai, a fully hydrogen fuel cell powered car in India. Talking about Toyota Corolla Altis, it is the first car in the country that will run on petrol, ethanol and electric.

A 1.8-litre petrol-hybrid engine has been installed in this car, which can run on 20 percent to 100 percent ethanol blending. This flex engine generates 75.3 kW of power and 142 Nm of peak torque. The car’s engine is also mated to a 1.3 kWh battery pack that outputs 53.7 kW of power and 162.8 Nm of torque. Its engine is mated to a CVT hybrid transaxle gearbox.

Introducing the country’s first flex-fuel car, Union Transport Minister Nitin Gadkari said, “Instead of running on a single type of fuel, a flex fuel car can run on up to 83 percent ethanol blended fuel. Let us tell you that it is not only Toyota. Rather, other companies have also introduced flex engine vehicles in India.Before Toyota, TVS, Bajaj and Hero introduced ethanol powered flex engine two wheelers.

What are Flex Fuel Vehicles?

Flex engine vehicles are designed to run on flex fuel. Such vehicles can run entirely on ethanol, flex-fuel (a mixture of petrol and ethanol) or petrol-diesel. Due to running on ethanol, such vehicles reduce the emission of harmful gases and also cause less damage to the environment. The central government is formulating a policy to start manufacturing flex engine vehicles in India. After the implementation of this policy, it will be mandatory for the auto companies in the country to manufacture flex-engine vehicles.

According to an estimate, ethanol business in India can be more than Rs 1 lakh crore every year from flex fuel. The use of ethanol will reduce India’s dependence on petrol imports and will also save crores of rupees in revenue. Apart from this, vehicular pollution will also be reduced by the use of ethanol blended flex-fuel.

To increase the production of ethanol, the country’s largest ethanol plant has been set up in Panipat, Haryana. The plant has been built at a cost of Rs 900 crore. On the basis of indigenously developed technology, about 30 million liters of biofuel i.e. ethanol will be produced annually using about two lakh tonnes of rice straw.