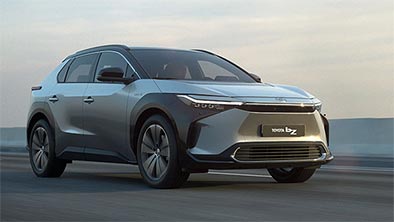 Premium feel in the interior

The interior of the Toyota bz4X electric SUV looks very premium. The company has given a thick windshield in it to reduce the noise of the tires in the cabin. The cabin gets a 12.3-inch central infotainment system. Apart from this, the cabin also gets wireless phone charger, USB C and A ports, built-in 4G modem, 9 JBL speakers and 800 watt amplifier system.

The digital key comes with the SUV

Toyota is introducing digital key technology for the first time with this electric SUV. This digital key can be shared by the car owner to his relatives so that he can give control of the SUV to others.

Toyota has used a powerful lithium-ion battery in this SUV. This battery gives the car a range of up to 560 km on a full charge. However, the all wheel drive model offers a range of 540 km. The company has given fast and normal charging option with the SUV. It takes 9 hours to get fully charged with a simple home charger.

Toyota Motors may start deliveries of the bZ4X from this year itself. The company has fixed its price in the United Kingdom at 41,950 Euros. Buyers also get the option of leasing the electric SUV along with wallbox charger, connected technology and maintenance cost. The company is also giving a warranty of 10 lakh km on this car.