This vlogger traveled from Kanyakumari to Kashmir on an electric scooter, know how 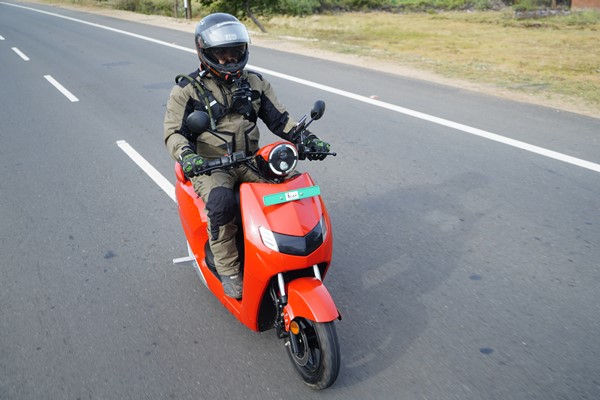 In the meantime, review it as well. He started vlogging five years ago under the tag ‘Weekend on Wheels’. He is actively vlogging about classic vehicles under the ‘Never Out of Fashion’ series, the series includes his biking journey and in-depth reviews of high-end bikes.

During the second half of 2021, he had a battle with a heart attack and had to quit vlogging for a few weeks. However, he continued his vlog series for Lonavalto to participate in the ‘Reclaiming Myself Ride’ IBW (India Bike Week) in December 2021.

The zealous Girish yearned to do something challenging. He planned to complete one of his longest rides, but this time on an electric scooter. For context K2K meant ride from Kanyakumari to Kashmir. Girish, however, felt that K2K should become Khardung-La from Kanyakumari. Khardung-La is one of the highest motorable roads in the world. Apart from riding an electric scooter and charging the battery, her main challenge was to withstand extreme weather along with the scooter.

Girish chose the Bounce Infinity E1 e-scooter because it had swappable batteries and could take him far. He named it ‘Ruby’ and started his journey to Khardung-la. Bounce offered them five additional swappable batteries for this trip, so that a total of six batteries could be charged simultaneously overnight.

Each of those batteries provided an average range of 70 kilometers per charge on power mode. He could travel around 250 kms in a day depending on the riding conditions. In the entire journey, Ruby and Girish have covered a distance of 4,340 km through 11 states.

For this he took 19 days to complete the journey, with 83 battery swaps. Talking about the “Ruby”, he said that he tried to break it but this scooter did not give up. He said that “I’ve done off-roading, climbing rocky mountains, riding rocky and sandy roads.”

He further added that “Still this scooter did not complain. I believe it outperformed itself when I had to go through a sand storm while moving from Kargil to Leh.”