This person won the auction of Tata Punch Kaziranga Edition, know how much he had bid 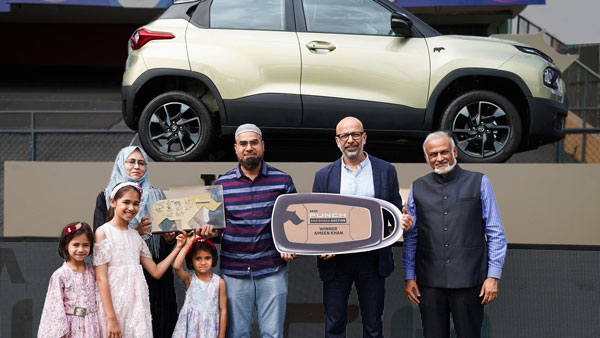 Amin Khan, a resident of Pune, was declared the winner with the highest bid. For information, let us tell you that as a commitment to the conservation of the country’s biodiversity, Tata Motors will donate the amount received from this auction to the wildlife conservation efforts in Kaziranga National Park, Assam.

The car key handover ceremony was held at the famous Wankhede Stadium in Mumbai. Apart from the car, the winner Amin Khan has also been presented with tickets for the Tata IPL League match in Mumbai along with two tickets for the most awaited Tata IPL final in Ahmedabad.

They also get a unique Rhino plaque signed by the captains of all Tata IPL teams for their new car, Tata Punch Kaziranga accessories as well as a fresh and all-expenses-paid trip for four people to the beautiful Kaziranga National Park. Has been given.

Symbolized by the Kaziranga Zoological Park – The Great Indian One-Horned Rhino, known worldwide for its agility and power, the range reinforces the ‘go-anywhere’ DNA of Tata Motors’ true SUV line-up. Did. It is the company’s safest sub-compact SUV.

Apart from the Kaziranga Edition, the company is selling the Tata Punch in a total of four trims – Pure, Adventure, Accomplished and Creative. Apart from this, the company has also made available 4 accessories packs, which range from Rs 30,000 to Rs 45,000 depending on the trims.

Currently, the Tata Punch is powered by a 1.2-litre, three-cylinder, Revotron petrol engine that produces 85 bhp power at 6,000 rpm and 113 Nm of torque at 3,300 rpm. It also has the option of a 5-speed manual as well as an automatic gearbox. A ‘Traction Pro’ mode has been given in its automatic variant.