This person came to buy a scooter with a sack of coins, down payment of 22,000 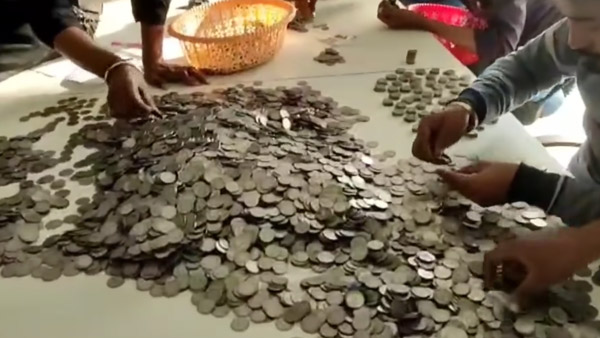 This seller decided to pay the cost of the scooter in coins and as his down payment, filled the sack and gave the coins to the dealership. He wanted to buy a scooter, but it was too expensive for him. So he started saving for it.

It took him a long time to save money for the scooter. He saved the coins for about a year and then approached the Suzuki dealership. After which the showroom started counting the coins and it took them two to three hours to count the coins.

The total amount in the sack of coins turned out to be Rs 22,000. The coins were brought to the dealership using a sack. The sacks were emptied into the baskets and then the counting began. In the video that surfaced, we can see the people of the dealership counting the coins.

The rest of the scooter amount will be paid through financing. Let us tell you that in the month of December last year, Suzuki Motorcycle India launched its new sporty scooter Suzuki Avenis. This new sporty scooter was launched by the company at an initial price of Rs 86,700 (ex-showroom).

This new sporty scooter from Suzuki Motorcycle has been launched in the market as a major rival to TVS NTorq and Honda Dio. In this, the company has also given the feature of Suzuki Smart Connect app, which allows it to pair with the smartphone.

Talking about the engine found in the new Suzuki Avenis, the company has used a 125cc engine with FI technology. This engine produces a maximum power of 8.7 bhp at 6,750 rpm and a maximum torque of 10 Nm at 5,500 rpm.

The weight of this scooter has been kept at 106 kg. Some of the highlights on the new Suzuki Avenis include the large and bold turn-by-turn navigation system along with the Suzuki Ride Connect. It also gets body-mounted LED headlamps and LED tail lamps.

Suzuki Motorcycle India has launched this scooter in the Indian market with five color options including Metallic Triton Blue color which will be available as Race Edition iteration across India. This version of the Race Edition will be equipped with Suzuki Racing graphics that will attract the distinctive personality of an enthusiast rider.