This Maruti Brezza was made Range Rover Evoque by investing Rs 6 lakh, know what changed 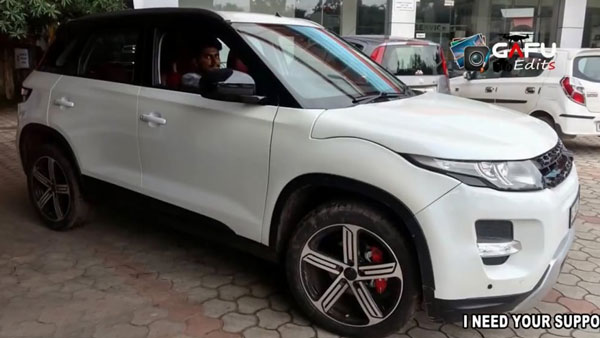 It can be clearly seen from the pictures that the upgrades made are purely cosmetic only and no changes have been made to the frame, engine and other internal components of this compact-SUV. In terms of changes, the Brezza-specific front grille has been omitted.

A Range Rover Evoque-inspired black grille has been used instead, leaving no stone unturned in the basic profile makeover. The car uses the same headlights as the Evoque and even the bumper now uses the same daytime running lights.

The Maruti Suzuki Vitara Brezza gets straight-cut fenders, while this typical example uses the Evoque-inspired curved fender cut and bonnet design. Coming to the side profile, it sports a familiar Brezza look with new alloy wheels and red colored calipers.

Apart from this, the taillights, flat boot doors and sporty spoiler of the Brezza have also been kept similar to the Evoque. Its boot area has also been given a new look. The roof and pillars of the Brezza have been kept in black color, while the silver skid plate on the lower half of the bumper gives a supportive look, which has dual exhaust openings.

It is worth noting that the modifications made are not limited to the exterior as the interiors now use silver door handles, air vents and steering wheel inserts. Apart from these inserts, red shade has been used on the dashboard, door covers and seats of the car.

The interiors of the Maruti Brezza share the same features as the Range Rover Evoque, but retain the same components that are available on the stock model of the Maruti Vitara Brezza. The car is powered by a 1.3-litre, four-cylinder diesel engine that produces 90 Bhp of power and 200 Nm of peak torque.