This man made a plane sitting at home in lockdown, know how much money has been spent 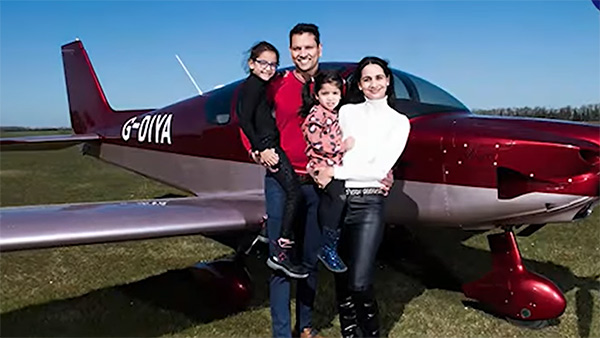 Making good use of his lockdown period, Ashok made a 4-seater plane and in it he traveled with his family to different countries. Ashok Aliseril Thamarakshan is actually from Kerala and he moved to UK with his wife in the year 2006.

Let us tell you that Ashok, who is a mechanical engineer by profession, suddenly got the idea of ​​making an aircraft during the lockdown. He also obtained a pilot’s license from the British Civil Aviation Company. He built a makeshift workshop at his home in London and began working on the aircraft.

According to the information, he started work on this project in May 2019 and he finished it by November 2021. But the reason behind making the plane will surprise you. Let us tell you that like any other metro city, London is also popular for its traffic jams.

Actually it is one of those cities, where the road is always congested. To avoid the crowd, Ashok decided to build an aircraft on his own. Now he can travel around 250 km in an hour without worrying about traffic block.

To fly this plane, he has also taken three months of training for a pilot’s license. His first flight took place on 7 February 2022 in London. Ashok took off for 20 minutes and after that in his plane he started family trips to different countries on May 6, 2022.

After making the aircraft, Ashok, his wife Abhilasha and their two daughters have traveled to many countries by their aircraft. Ashok has named the aircraft after his younger daughter. They named this plane G-DIYA, where the ‘G’ represents the emblem of the planes in London.

Before building his own aircraft, Ashok used to rent small 2-seater aircraft for trips after obtaining his pilot’s license. When his family started expanding, there was no point in flying a 2-seater plane and that’s when he started looking for a 4-seater plane.

During his research, he found a company named Sling Aircraft based in Johannesburg. Ashok visited their plant and soon ordered a kit to build his aircraft. It has cost about Rs 1.8 crore to build this small 4-seater aircraft.