This Indian businessman bought the country’s first Airbus luxury helicopter, know what are the features 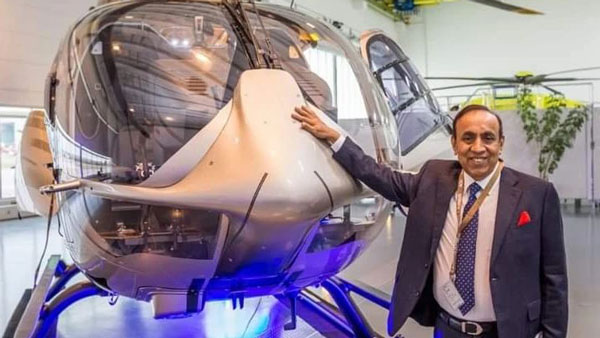 This helicopter is the first Airbus D3 helicopter in India and the first five-blade H145 helicopter in Asia. RP Group has its own private helipads. The group has helipads at Kozhikode, Kollam and Kovalam, which are used for all types of helicopters, small and large.

With the addition of the new helicopter, tourism will increase and it will also be used by their guests for sightseeing. B Ravi Pillai, 68, is the owner of a $2.5 billion company and employs around 70,000 people in his company.

According to the company, the H-145 is a small-sized helicopter whose cabin can be used for a wide range of requirements. This helicopter is Airbus’s newest 4-ton twin engine rotor helicopter.

The H145 helicopter family includes helicopters such as the BK117, EC145 and H145. There are 1,500 such helicopters in service around the world and it has flown more than 6 million hours.

The H145 helicopter is known for its safety features. The helicopter has been provided with energy absorbing seats which ensure the safety of its passengers at the time of accident. Additionally, the chances of fuel leakage are also minimal. H145 is equipped with advanced wireless communication system.