This compact device will convert the cycle into an electric cycle, Anand Mahindra praised 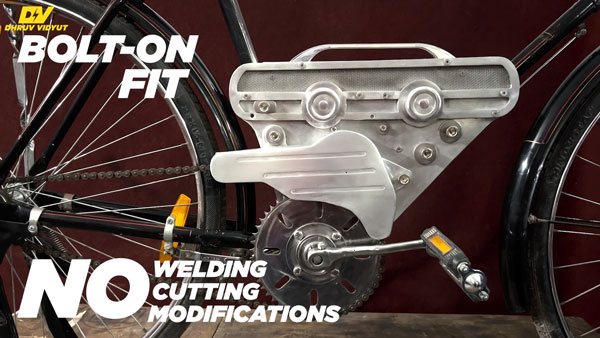 Gursaurabh Singh of Punjab is the owner of a startup named Dhruv Vidyut. According to the Twitter profile, this company researches and develops electric products. Recently they have invented a small electric motor which runs on battery and is extremely compact. The special thing is that it can be easily fitted in the bicycle with the help of nuts and bolts. For this no cutting, welding or fitting is required in the bicycle.

This device is very useful

This battery powered device is small but very useful. In the video of Dhruv Vidyut on Twitter, it has been told that after installing this device, there is no need to die pedal in the bicycle. It runs on its own just by rotating the accelerator.

After fitting this kit, the bicycle can run at a speed of 25 kilometers without pedaling. At the same time, on a single charge, it can be driven up to 40 kilometers. The capacity of this bicycle is to lift the weight of 175 kg.

It can also be driven on rough roads. The biggest thing is that even fire and water have no effect on this electric kit. Even this kit works even after being soaked in mud.

According to Dhruv Vidyut, the device is made of aircraft grade aluminum, so it is extremely lightweight and does not rust. The company claims that it can be fitted on any domestic cycle in just 20 minutes. It also has a socket for charging the battery and phone on one side.

The company also claims that its battery can also be charged by rotating the pedal. Its battery can be charged up to 50 percent by just turning the pedal for 20 minutes. Like a motorcycle, a throttle has been installed in it to control its speed. There is also an ignition switch to turn it on or off.

This innovation is making headlines across India. Mahindra Group Chairman Anand Mahindra has also praised this innovation of Gursourabh in one of his tweets. He wrote that many devices already exist in the world to make a cycle like a motorcycle, but the small design of this device and the ability to work in mud etc. and the convenience of charging the phone makes it special.