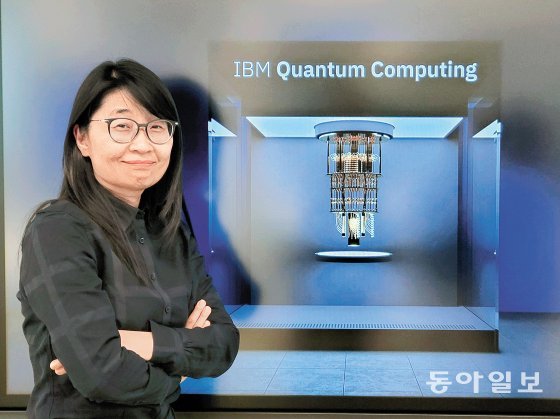 “It is meaningful to research and develop quantum computers, but now the important time has come to ‘who and how to use them well’. Boeing of the United States and Daimler of Germany have already begun research using quantum computers. In Korea, it can be a great tool for the development of the battery industry as well as the chemical, pharmaceutical and bio fields.”

Baek Han-hee, a 47-year-old Quantum Computing researcher at IBM Quantum Group, met at the IBM Korea headquarters in Yeouido, Seoul on the 17th and repeatedly emphasized the high utility of quantum computers.

Researcher Paik received his bachelor’s and master’s degrees in physics from Yonsei University, and then went to the United States to receive his doctorate from the University of Maryland. While researching superconducting elements in Korea, the thought of making and using devices using these elements led to research on quantum computers based on superconducting technology. After receiving his PhD, he worked on the core principles of quantum computers at Yale University, before joining IBM in 2014. IBM is considered one of the most advanced companies in quantum computing.

While pursuing a postdoctoral research course at Yale University, Researcher Baek succeeded in researching to significantly increase the ‘coherence time’, which is the amount of time a quantum computer maintains a stable state for computational work. This study drew attention from academia as it opened the possibility of industrialization of quantum computers. Research papers written by Professor Baek at the time have been cited more than 1,000 times to date, and he was also selected as a Fellow of the American Society of Physics (APS) last year.

Unlike conventional computer CPUs that can contain only 0s or 1s in one information unit (bit), quantum computers can simultaneously store 0 and 1 in one qubit (Qbit) and process multiple operations at once. This is the reason why quantum computers can count multiple cases at the same time, whereas conventional computers count the possible ‘number of cases’ one by one when performing an operation.

“A number of global companies, including Boeing, Daimler, and ExxonMobil, have started working with IBM to solve their problems using quantum computers,” said Baek. ” he emphasized.

American aircraft maker Boeing is working to explore material interactions in harsh environments and applying quantum computing to aircraft design. Daimler, the parent company of Mercedes-Benz, is using quantum computers to accurately simulate the chemical reactions inside the battery.

IBM, which opened the door to the generalization of quantum computers by introducing the world’s first cloud quantum computing service in 2016, is also operating the ‘IBM Quantum Network’ consisting of 170 member companies including world-class companies, academic institutions, and research institutes. In Korea, Samsung Electronics, LG Electronics, Sungkyunkwan University, and Yonsei University have joined the network.