The temperature of the planet Neptune suddenly decreased, the scientist was surprised 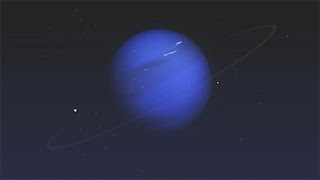 Scientists studying the temperature of Neptune were recently surprised. They have detected unusual temperatures on this planet. According to scientists, they did not anticipate the temperature fluctuations in the planet. The planet cools down during the summer and then heats up at the South Pole. The study’s lead author, Michael Roman, said in a statement that the change was unexpected. He said that we have been seeing Neptune for a long time. These findings have surprised the researchers.

This drop in temperature can be due to many reasons. These include planetary chemistry, weather patterns and changes in the Sun. For the last 17 years, many telescopes are being used to observe Neptune. Astronomers using these telescopes have observed a shocking drop in the temperature of the planet.

This study is called Sub-Seasonal Variation in Neptune’s Mid Infrared Emission in The Planetary Science Journal. published has been done. Studies show that like Earth, Neptune has seasons, but they last much longer. By the time a year ends in Neptune, 165 years have passed on Earth, and a season there can last for about 40 years.

During the study, scientists wanted to understand the seasonal patterns of the planet Neptune. For this, they looked at about 100 thermal-infrared images of the planet to track the change in temperature during the summer solstice in the southern part of Neptune. Scientists understood that summer had arrived, but thermal images showed that between 2003 and 2018, the temperature had dropped by 8 degrees Celsius and much of the planet had cooled. However soon the South Pole suddenly became warm.

Between 2018 and 2020, the South Pole saw an increase of 11 degrees Celsius in temperature. Scientists studying the planet did not expect this change. He has published his study in The Planetary Science Journal.