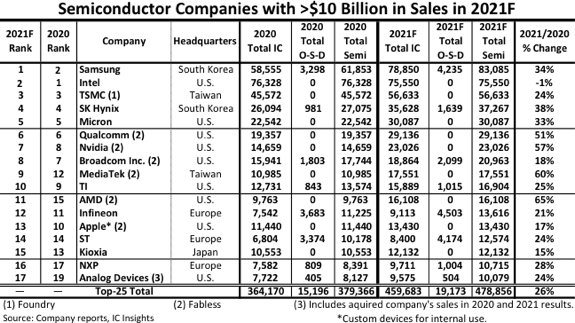 Analyst firm IC Insights has updated its forecast for the semiconductor industry for the last time this year. In practice, this is not even a forecast, but a preliminary summing up of the results of the year.

Analysts estimate that 17 manufacturers have surpassed $ 10 billion in revenue this year. This threshold was first reached by AMD, NXP and Analog Devices.

The headquarters of the nine “mega-suppliers” are located in the United States. Three of the companies on the list are located in Europe, two each in Taiwan and South Korea, and one in Japan. At the same time, the list includes six companies that do not have their own production (Qualcomm, Nvidia, Broadcom, MediaTek, AMD and Apple) and one company, on the contrary, is engaged only in contract manufacturing (TSMC).

According to the results of the year, analysts see Samsung as the market leader. The South Korean manufacturer’s revenue for the year increased by 34%, to about $ 83.1 billion. At the same time, Intel, relegated to second place, reduced sales by 1% compared to last year, to $ 75.6 billion. The data of all 17 companies are shown in the table: