Analyst company Counterpoint published a report on the smartphone market in 2021. Annual revenue growth was 7%, and in the fourth quarter of last year it increased by 20% compared to the third quarter – neither the pandemic nor the shortage of semiconductor components caused by it prevented positive dynamics.

Average Selling Price (ASP) up 12% year-on-year to $322 driven by an increased share of 5G models that cost more than 4G-only devices; Another positive factor was the success of the iPhone 13 series, released in the fall. A large number of low-cost 5G models have been launched by leading Chinese brands, including Xiaomi, Vivo, Oppo and Realme, all of which have provided strong demand for 5G smartphones in emerging markets, including India, Southeast Asia, Latin America and Eastern Europe. As a result, the share of 5G models in the global market in 2021 was 40%, and in 2020 it was only 18%.

Counterpoint analysts also noted an increased demand for mid-range and premium models – they explained this trend by the fact that people who work remotely decided to upgrade their devices for higher performance. In addition, the lack of components has forced brands to raise prices for budget and mid-range devices.

Apple became the leader of the global smartphone market in terms of revenue with 35% growth and $196 billion – at the end of 2021, its share among all sales was 44%. Due to strong demand for 5G compatible iPhones 12 and 13, the company increased ASP by 14% to $825. Apple also increased its share of key emerging markets in India, Thailand, Vietnam and Brazil.

Second place went to Samsung, whose revenue last year grew by 11% to $72 billion. The Korean manufacturer increased its ASP by 5% to $263, and also increased its market share due to mid-range and premium segment devices. The company also tripled the supply of folding models. 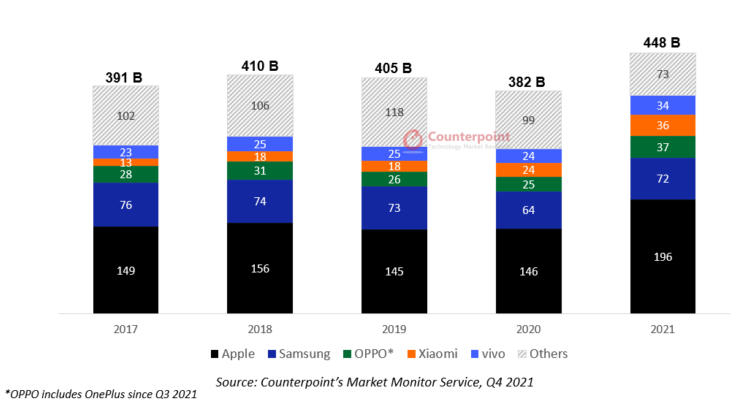 Finally, Vivo raised revenue by 43% to $34 billion and ASP by 19% to $259. Counterpoint named the brand the fifth largest manufacturer in the world in 2021 in terms of revenue and device shipments. The success of the brand was ensured by the X60 and S series, good sales in China and a wide range in all price categories.