The flying bike has come, it flies at a speed of 100 km / h, knowing the price, the senses will fly away 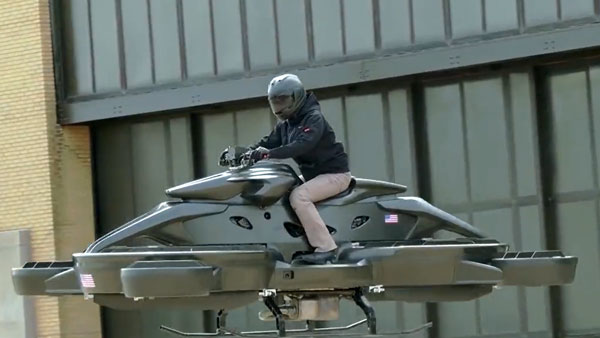 Flight can fill up to 40 minutes

The company that makes the hoverbike claims that this bike can fly in the air for 40 minutes. During this time it can fly at a speed of 60 miles / h i.e. about 100 km / h. It is said that to keep the weight of this flying hoverbike light, it has been made completely from carbon fiber. At the same time, four small and two big rotors have been installed to help the bike fly.

According to the information, this bike works on drone technology and can do vertical takeoff and landing very easily. This hoverbike is already being sold in Japan. Airvins founder and CEO Shuhei Komatsu has stated that plans were underway to sell a smaller version in the United States in 2023. Inspector Thad Jott, who flew the bike in Detroit, said that the experience of flying this bike is like flying a hoverbike in Star Wars.

How much will be the price?

Let us tell you that the company has fixed the price of this hoverbike in the US at $ 7,77,000, which is about Rs 6 crore in Indian currency. Although the company claims that by the year 2025, its smaller unit will also be introduced in the market, which can cost around $ 50,000.

Let us tell you that now many companies around the world are making flying cars and bikes and there is a huge demand for them in the international market. Recently, Jetson One, the flying car of Italian startup company Jetson, has been completely sold. The company says that this car is being liked by people all over the world.

The Jetson One Flying Car can fly at an altitude of 1,500 feet above the surface. This flying car is completely battery operated and can be flown up to a range of 32 km on a single full charge. It is capable of flying at a maximum speed of 102 km/h. The company had produced a few units after its launch, which the company was aiming to sell throughout the year, but due to heavy demand, all its units were sold on the very first.

The company has fixed the price of a flying car at US$ 90,000 which is approximately Rs 71 lakh in Indian currency. The company says that this flying car has been made available to all types of customers across the world.

Jetson One is a vertical takeoff and landing (VTOL) vehicle that was launched in October 2022. It weighs 86 kg and can fly for 20 minutes at a top speed of 102 km/h. Jetson claims that it is the world’s first economical flying car that does not require a flying license to operate. Only one passenger can fly in it.