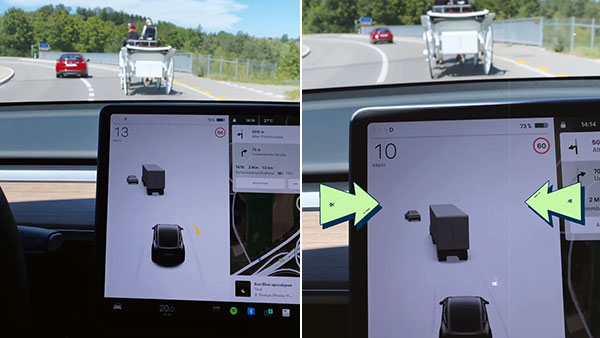 One of them resembles a horse and a buggy. Tesla’s self-driving software looks like a truck due to its length, but it’s funny to see the AI ​​get confused. As soon as this video surfaced, it has become increasingly viral on social media.

Soon trolls such as “Tesla vs Horse Carriage”, “Elon should fix this” and “Bro is playing prop hunt” started coming up with it. A few days ago, the Department of Motor Vehicles in California accused Elon Musk-run Tesla of making fake claims about its Autopilot and full self-driving features.

The agency said in its filing that Tesla “misunderstood” that cars equipped with the technology can operate autonomously. The DMV pointed to information on Tesla’s Autopilot page that said its FSD system is “designed to be able to make short and long distance trips without action required by the person sitting in the driver’s seat.”

Also able to navigate urban roads, complex intersections and freeways. For your information, let us tell you that Tesla was about to launch its cars in the Indian market, but the company abandoned this plan due to non-availability of import duty by the Indian government.

According to a report, after starting the Gigafactory in Shanghai, China, Tesla is now planning to set up its second Gigafactory in Indonesia. It is being told that Tesla has been in talks with the Indian government for the last few years to cut the import tax of Tesla cars. The company had told the government that due to higher import tax on cars in India, its cars could become expensive.