Tata Tiago CNG Review: Now CNG and Petrol in the same car, know how it performs 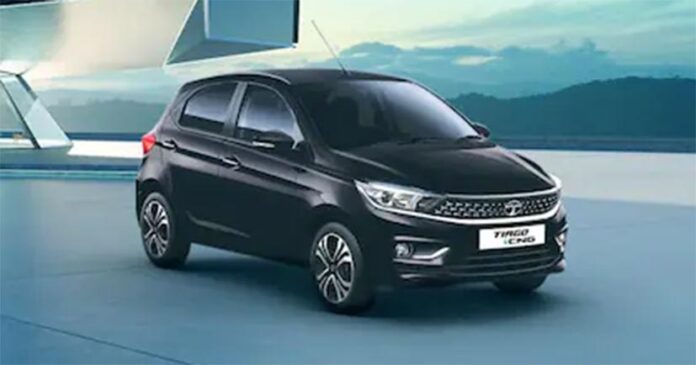 In such a situation, Tata Motors has also entered this segment and has recently launched CNG vehicles. The company has launched its popular models Tiago and Tigor ICNG models, they have been brought in the option of many variants. Recently Tiago has driven the top variant of ICNG. Is it different than the petrol model? Let’s know.

The Tiago ICNG doesn’t differ much from the outside as compared to the current petrol model. The biggest change comes with a new color option. Named as Midnight Palm and Dark Palm, it appears completely black in colour, though it looks attractive when viewed in the sun and differentiates the Tiago from the hatchback.

The Tiago has been given sweptback headlight, we have driven its top variant and it has been given a headlight unit. In its low beam, the projector and high beam uses the reflector part of the headlight. It has a black colored grille in the middle, it has been placed on the pattern of three arrows, heavy chrome has been given on the front and grille, as well as the Tata logo has also been kept on the chrome.

The lower bumper gets a dual-slate grille, along with fog lights and inverted L-shaped DRLs on both sides. Lower lip has been given to give it a sporty look.

When viewed from the side, many things attract your attention. It is fitted with 14-inch wheels but has been fitted with four spoke steel wheels, along with wheel caps. But its quality is so great that it looks like an alloy wheel. Black colored roof, spoiler and ORVMs have been given in Tiago ICNG.

The Tata Tiago ICNG is the largest space vehicle in its segment. It has a dual tone interior, black and beige. The upper part of the dashboard has been kept in black and the bottom and center console in beige. Along with this, piano black color is seen in many places. Chrome has been placed on the AC vents and it gets a 7-inch touchscreen infotainment system borrowed from Harmon.

It has several buttons but three will be used daily, one for the fog lights, one for locking/unlocking the car. It has a CNG button which helps in switching from petrol to CNG.

Below these buttons is the beige color of the dashboard and the central console has been given, here is the control panel for climate control. It can control temperature and fan speed.

It has a small LCD screen. The main 7-inch screen has been given for information and it can be difficult to understand to operate. There is a small keyhole next to the gear lever where the phone can be placed, but an armrest could have been placed here.

The Tiago ICNG comes with plenty of space, the seats are made from fabric. The base color in this is black and contrast stitching has also been given. The gray shade in the middle and the three arrow wall signature design of Tata has been given. Its door panel has been kept in a simple design and it has also been kept in black and beige. The door handles are housed in brushed aluminum and the door pockets are of ample size.

This door pocket can hold a 500ml water bottle. There are two speakers placed on the door. Its seats are very comfortable and the driver and co-driver get a lot of space. The second row is also comfortable but the space has been reduced. Its headroom and kneeroom is also great but the Thai support could have been better. The rear passenger also seems to lack features.

The CNG tank has been placed on its boot, this big 60 liter tank has been given which takes up the entire space of the boot. It is placed on a specially made steel rack. 242 liters of space has been given on the Tiago petrol but only 80 liters of boot space is available in the ICNG. A small bag can be placed on the spare wheel, although this space requires the rear seat to recline.

Tata Tiago ICNG can be seen on petrol or CNG. But this car prefers CNG but whenever you run it in petrol mode and turn off the ignition and start again then it comes back to CNG. This is the first car in the country which can be started in CNG mode as well and it is a wonder of single advance ECU.

Its 1.2 liter engine has been placed in the Tiago. Some modifications have been done to make it as CNG, CNG cars are generally slower and ICNG feels the same. With a petrol engine, it produces 84.8 bhp at 6000 rpm and 113 Nm of torque at 3,300 rpm. The CNG button has been given on its dashboard, due to which the CNG mode is visible in the active notification instrumentation. Due to which the power becomes 72.39 bhp and torque becomes 95 newton meters.

It produces 12.4 bhp and 18 Nm less than the petrol mode and thus lower performance. It is a little slow but can easily achieve the figure of hundreds, its acceleration does not change. The car can be switched to CNG mode and petrol while driving, without any hesitation or delay in throttle response. Tiago ICNG is the most powerful car in its segment.

The suspension setup has been kept a bit tight but that doesn’t mean it offers a bad ride. A pothole can be felt in it. It has a ground clearance of 168 mm, which is 2 mm less than the petrol model. Braking is good and tires with low rolling resistance do not give that much confidence to ride on the edges.

Tata Motors is known for its safe cars and the Tiago is no different. It has been rated 4 stars in the Global NCAP crash test. It has excellent build quality and basic safety features.

Along with this, it comes with safety features related to CNG, it has been given a stainless steel CNG tank which has been tested on various temperatures and conditions. It has been given thermal incident protection and whenever there is a fire or thermal accident, it stops the supply of CNG.

It is available in five variants

The Tata Tiago has always been a great hatchback. It is not only good in terms of safety rating, but also space and comfort have been given in it. Along with this, the option of petrol and CNG has been given.

Till now many companies have brought CNG models but till now those cars are available in only one or two variants. Tata Motors has brought ICNG in many variants with different prices and features.