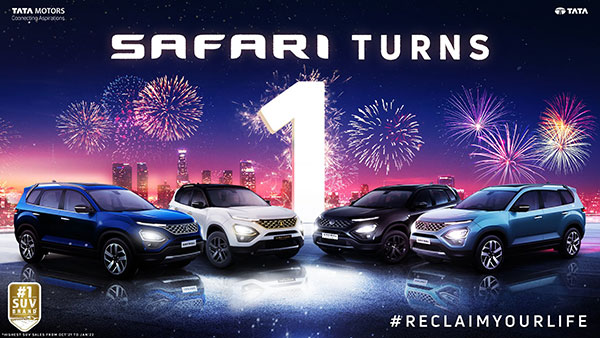 Tata Motors has launched the new 2021 Tata Safari in 7 variants – XE, XM, XT, XT+, XZ, XZ+ and Adventure Edition. Along with this, it has also been made available in Dark Edition, the company is soon going to bring it in Kaziranga Edition as well. The SUV is available in the normal model as well as the Adventure variant which has been designed keeping in mind the off-road vehicle customers.

The Safari is built on the same platform as the Harrier, though it is longer than the Harrier. The SUV features a tri-arrow front grille, roof rails with Safari branding, R18 machined alloy wheels, and the signature twin light LED tail lamp. It has the option of both 6 and 7 seats, the option of captain seat is available in the 6 seater variant.

It is powered by a 2.0-litre diesel engine that produces 173 bhp of power and 350 Nm of torque, mated to a 6-speed manual gearbox and a 6-speed automatic torque converter gearbox. Along with this, the option of several driver modes has been given.

Along with this, many more features like disc brake on all wheels, auto dimming IRVM have been given. It gets 6 airbags for safety, ABS with EBD, hill descent control, child seat isofix, rear parking sensors, traction control, hill hold control. The 2021 Tata Safari has been brought in the option of 9 manual and 6 automatic trim.

How is Dark Edition?

Tata Safari has been a big name in India and its new avatar is also getting good response from the customers. This SUV of the company has now completed one year in India, although it is getting tough competition due to less convenience than the competitors.