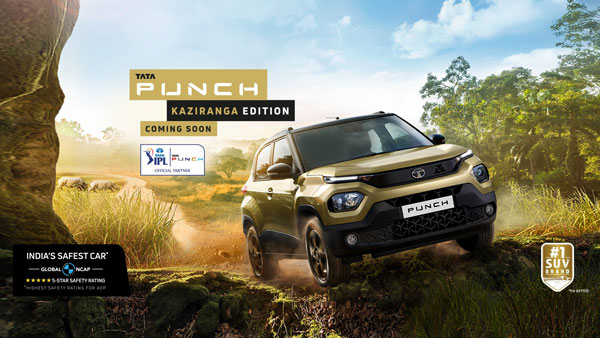 Carmaker Tata Motors recently released a teaser video of these special edition SUVs, in which it was revealed that the company’s Tata Punch, Tata Harrier and Tata Nexon’s Kaziranga Edition will be offered with many additional features. .

All these features are not available in the standard trims of these SUVs. It is worth noting that the company has not added any new features to the Tata Safari, as all of the above were introduced in the Gold Edition. All the special edition SUVs will be produced in the Grassland Beige shade.

This shed mimics the savanna grass found in the expanse of Kaziranga. Apart from this, the black colored alloy wheels, badges and dechromed elements look good with this color. Talking about the interiors, the Kaziranga Edition SUV gets a black dashboard with contrasting beige touches on the seats and door pads.

Also, the front seat headrest has a raised silhouette of a one-horned rhinoceros. The center trim on the dashboard of the Tata Punch is finished in beige, while the others have been kept in wooden trim. Let us tell you that till now Tata Motors has revealed five key features.

These features will be packed inside these new SUVs. The Tata Nexon, which is currently the best-selling compact SUV from the carmaker, will be exclusively equipped with ventilated seats. The inner upholstery of the Tata Nexon Kaziranga Edition will feature premium Beneque Calico dual-tone earthy beige leatherette.

Talking about other features available in this special edition, the company will introduce Inside Rear View Mirror or IRVM with auto dimming facility in these SUVs. This feature will also be made available in the Tata Nexon Kaziranga Edition.

This will help to ‘detect glare and adapt to ideal road vision’. Talking about the features found in Tata Safari Kaziranga Edition, then it will get the facility of wireless charging. This is a feature that is already available in the three-row seven-seater SUV.

All special edition SUVs will get the existing powertrains. The company’s flagship SUVs, the Tata Harrier and Safari, get a 2.0-litre diesel engine that churns out 170 bhp, while the Tata Punch only gets a 1.2-litre petrol engine that makes 86 bhp.

On the other hand, talking about the Tata Nexon, it is offered with two engine options, the first being a 1.2-litre turbo-petrol engine that produces 120 bhp, while the second is a 1.5-litre diesel engine, which produces 110 bhp. Provides power of BHP.