T-Series’ director Bhushan Kumar gifts a Ferrari supercar to the director, will be stunned to hear the price 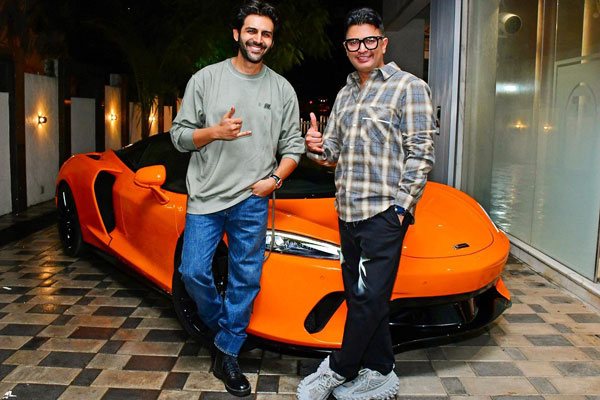 Ferrari F8 Tributo is a great car of the company and is loved by people all over the world. This Ferrari car is also not easily available, due to which this car becomes even more special. Recently Om Raut has been seen driving this Ferrari car on the streets of Mumbai. This car looked very attractive.

The car achieves a top speed of 340 km/h and is electronically limited. In this, Side Slip Control 6.1 and Ferrari Dynamic Enhancer+ have been given to control the slide in the car. In the month of September 2022, this car has been replaced by 296 GTB. The Ferrari F8 Tributo was introduced in India in 2020 and will replace the 488 GTB.

Bhushan Kumar is known for gifting luxurious cars to his co-workers. Recently, he gifted the country’s first McLaren GT to Karthik Aryan. This gift was given to Kartik Aaryan after the huge success of his new film Bhool Bhulaiyaa 2. By giving a gift in the form of a car, people save many types of tax.

Karthik’s car is the first McLaren GT car in India. It is also the cheapest McLaren car sold in India. The McLaren GT gifted to Karthik is orange in color and has been fitted with glossy black alloy wheels. It has a black rooftop. This car has been modified according to the choice of Karthik.

Being a grand tourer model, the McLaren GT has been designed in such a way that it is capable of running for miles with ease. The supercar is powered by a mid-mounted, 4.0-litre twin-turbo V8 engine that generates 611 Bhp of power and 630 Nm of peak torque. The engine comes mated to a 7-speed dual-clutch automatic transmission and power is routed to the rear wheels through an open differential.

Bhushan Kumar was one of the first to buy a Ferrari in the country and has a great collection of luxury cars. In such a situation, he keeps gifting cars to people from his collection as well. He was seen with this Ferrari earlier this year.