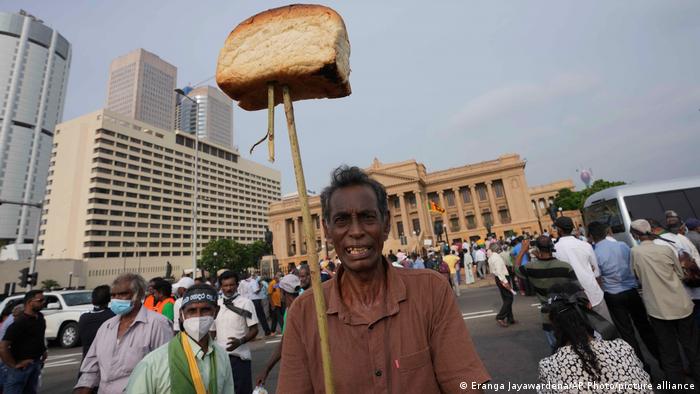 Sri Lankan President Gotabaya Rajapaksa has appealed to the people of the country to use fuel and electricity sparingly. But citizens blame his government for the country’s worst economic crisis in nearly 75 years.

Sri Lanka, facing economic crisis, will demand a relief package from the International Monetary Fund (IMF). This was announced by President Rajapaksa on Wednesday, before people protested outside the President’s office regarding inflation in daily necessities.

Rajapaksa said his government was in discussion with the IMF, other agencies and countries on postponing loan repayments. He asked the people of the country to help limit the consumption of electricity and fuel due to the worst economic crisis. The South Asian country is going through the worst phase on the economy front since its independence in 1948. Angered by the economic troubles, people are now protesting against the government by taking to the streets.

Although the issue predates the war in Ukraine, rising fuel prices have worsened the country’s economic situation in recent weeks. “Following my discussions with the International Monetary Fund, I have decided to work with them,” Rajapaksa said in an address to the nation. Rajapaksa said, “The public can also support the country at this time by limiting the use of fuel and electricity as much as possible.”

He also said, “I hope you understand your responsibility in this challenging time.”

The country’s political parties and civil society groups have blamed the government for the economic crisis and have led to massive protests across the country. Critics of the influential Rajapaksa family have accused the president’s elder brother, Prime Minister Mahinda Rajapaksa, and Finance Minister Basil Rajapaksa of nepotism and mismanagement.

Meanwhile, on Wednesday, Sri Lanka’s Finance Minister Basil Rajapaksa met Prime Minister Narendra Modi in Delhi on Wednesday. During the meeting, the Finance Minister thanked Modi for India’s support for the economy of Sri Lanka. Modi talked about India’s ‘neighbourhood first’ policy and Sri Lanka’s central role in its SAGAR (Security and Growth for All in the Region) doctrine. He reiterated that India will always stand by the friendly people of Sri Lanka.

The main opposition party on Tuesday staged a massive demonstration near the President’s office demanding his resignation over rising prices of food, medicine and other essentials. Rising inflation has become a new problem for Sri Lanka with a population of 22 million.

Sri Lanka is finding it very difficult to pay for its imports, so the country is grappling with record levels of inflation as well as unprecedented food and fuel shortages.

The corona virus epidemic has badly devastated the country’s tourism sector and there has also been a decrease in remittances of Sri Lankans living abroad. (AP)