Spider-Man also bought his first electric car, know what is special in a luxurious and sporty car 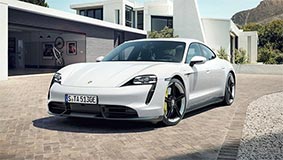 Although not many people know that Tom Holland loves his cars just like the movies and now recently he has included an electric car in his garage, which is no less in terms of style. Tom Holland recently shared a monochrome picture on his Instagram handle.

In this picture, he can be seen standing next to a new Porsche Taycan Turbo S and has informed that he has bought the car. Sharing the picture, Tom wrote, “Electric Peter K. Thanks porsche_gb for helping me go electric. #PorscheTaycan.”

Let us tell you that Tom Holland has bought the top-spec Porsche Taycan Turbo S variant, which is being sold in the Indian market for 2.13 crores (ex-showroom). The Taycan Turbo S is currently a sports saloon and the most powerful sports car in Porsche’s portfolio.

This electric supercar comes with two Permanent-Magnet Synchronous (PMS) motors. Both the electric motors together provide 750 bhp power and 1050 newton meter maximum torque to this car. This four-door electric supercar can accelerate from 0 to 100 kmph in just 2.8 seconds.

At the same time, the company claims that the top speed of this electric car is 260 km per hour. To power the electric motors, Porsche has used a massive 93.4 kWh battery that offers a maximum range of between 390 and 416 km on a single charge.

Tom Holland isn’t the only one in his garage to have a fast and luxurious car, but yes, it’s his first Porsche car to buy an electric one. The actor also owns great and luxurious cars like Audi RS7 Sportback, Audi Q7 and Rolls Royce Cullinan Black Badge.

His last film in the Spider-Man franchise was ‘Spider-Man: No Way Home’, released in 2021 and it broke new records for Marvel Studios, as well as dominated the internet with multiverse and pop culture references. Apart from this, he will be seen in the anthology series ‘The Crowded Room’, which will stream on Apple TV+.