Space flight trajectory of Nuri as seen through orbital mechanics 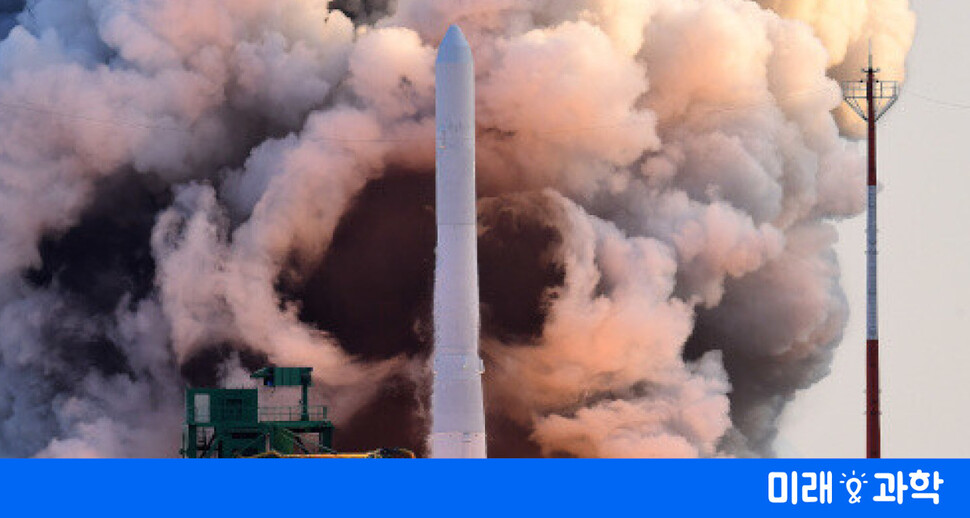 [윤복원의 물리상식으로 푸는 요즘 세상]
The second half of the Nuri space flight is an ‘elliptical orbit’ due to inertia
Parabola if equal to gravity escape velocity, hyperbola if faster

On October 21st, the first launch of the satellite launch vehicle Nuri developed with Korea’s own technology took place. Although it successfully reached an altitude of more than 700 km, the satellite projectile detached from the projectile unfortunately failed to orbit the Earth orbiting satellite and fell into the waters of southern Australia.[1] Because it has not reached the speed to become a satellite. When more accurate results of the flight trajectory analysis of the rocket launcher are released, the specific cause of the Nuri’s failure to reach its target speed is expected to be revealed.

When planning the launch of a rocket projectile or analyzing the results of the launch, it is necessary to calculate the trajectory of how the projectile flies. However, this calculation is not a simple matter. There are many things to consider, such as the thrust of the rocket, the mass of the projectile that decreases over time as it uses fuel, and the angle at which the projectile flies. Air resistance also affects when flying in the atmosphere. On the other hand, it is surprisingly not difficult to calculate the case of flying without propulsion in space without air resistance. This is because it can be calculated relatively simply with orbital mechanics. Satellites and space stations orbit the Earth in an elliptical shape. Using Kepler’s laws of planetary motion, an elliptical orbit can be described almost accurately. This law was discovered in the early 17th century by observing the motion of planets around the sun with an astronomical telescope. By changing the sun to the earth and the planets to artificial satellites, we can explain the elliptical orbits of artificial satellites and space stations around the earth. In the late 17th century, Newton explained Kepler’s laws of planetary motion accurately mathematically and physically while establishing the laws of motion and universal gravitation. Later, it developed into orbital mechanics that can be applied to rockets and spacecraft moving under the influence of gravity. It is not only the movement of satellites or space stations around the Earth that can be explained by elliptical orbits. It is also useful for explaining the case of falling in the middle of not fully orbiting the Earth. This is because the motion of flying through space only with inertia after completing rocket propulsion is elliptical. Only part of the ellipse comes out because it is intercepted by the Earth. The latter movement of intercontinental ballistic missiles falls into this category. The elliptical orbit can also be applied to the satellite model of the Nuri-ho that has fallen to the ground. This is because the trajectory of the flight is no different from that of an intercontinental ballistic missile. After completing the third stage combustion, the separated satellite model flew by inertia without rocket propulsion. If an elliptical orbit is applied to this part, the velocity of the satellite can be estimated from the highest height and the distance traveled. The highest height the Nuri has climbed is between 700 km and 750 km, and it is known that it flew another 5000 km after that.[2] Considering that the speed and distance traveled by air resistance are reduced after re-entering the atmosphere, this trajectory is close to the trajectory when flying at about 6.4 km/s at the highest height. At this height, the speed to become an artificial satellite is 7.5 km/s, which was less than 1 km/s.

_______There are two types of orbits that occur when you escape gravity.

Elliptical orbits appear when trapped in gravity. To completely escape gravity and travel very far away, you need a speed of escape from gravity or more. In this case, the shape of the flying orbit is not an ellipse. There are two types of orbits that completely escape gravity. The first is a parabolic trajectory that flies precisely at an escape velocity from gravity. This is a case where the speed is barely escaping from gravity to the point where the speed at a very distant place is almost zero. Since an elliptical orbit occurs at a velocity even slightly less than the escape velocity of gravity, the parabolic orbit is at the boundary of the elliptical orbit. The shape of the second trajectory that escapes gravity is hyperbola and appears when it flies faster than the escape velocity of gravity. Likewise in this case, if the velocity is very close to the gravitational escape velocity, it will become parabolic. There is a parabola at the boundary of a hyperbola. The rate of escape from gravity depends on how far away you are from the object providing the gravity. In the case of the Earth, the normal escape velocity from gravity is considered to be 11.2 km. This speed is the speed at the Earth’s sea level. However, in the real world, due to the air resistance of the atmosphere, it cannot escape the earth’s gravity at this speed. This is possible only if we assume that there is no atmosphere like the surface of the moon. The Earth’s gravity escape speed at 700 km above the Earth, the highest target of the Nuri, is 10.6 km/s. At this height, the speed of the satellite orbiting in a circular orbit is 7.5 km/s, and the escape velocity from gravity is 10.6 km/s, which is √2 = 1.414 times that. A spacecraft flying at this speed at an altitude of 700 km begins to fly in a parabolic shape. However, there is a problem that other celestial bodies exist. Their gravity affects the trajectory of a flying spacecraft. For example, a spacecraft flying at 10.6 km/s at an altitude of 700 km above the Earth will initially fly in a parabolic shape. However, as you move away from the Earth, the gravitational pull of the sun and the moon begins to break out of the parabolic shape. When you get far enough away from both the Earth and the Moon, the gravity of the sun becomes much more important, so the spacecraft becomes trapped in it and begins to orbit the sun in an elliptical shape. For a parabolic orbit that escapes the sun’s gravity, the spacecraft’s speed must increase with the solar gravitational escape velocity. At the position of the Earth’s orbit around the sun, the escape velocity of the sun’s gravity is about 42 km/s. For a hyperbolic orbit to occur, it must be at a speed greater than the escape velocity of the sun. In the case of departure from the Earth, 29.8 km/s, which is the orbital speed of the earth, is an added bonus, and the second space speed, 16.7 km/s, is required because it has to escape the earth’s gravity instead. On the other hand, even if it flies at a speed that escapes the gravity of the sun, if it passes near another planet on the way, the shape of its orbit changes due to the influence of the planet’s gravity. Space probes Voyager 1 and 2 are representative examples of the speed is greater than the escape speed of gravity, and thus they fly in a hyperbolic orbit.[3] They fly away from the sun in a hyperbola with respect to the sun. At a distance of more than 23 billion km from the Sun, Voyager 1 is moving away from the Sun at 17.0 km/s. In the not-so-distant future, when it reaches a point where the gravitational force of the sun is almost unreachable, the speed is expected to be slightly lower to 16.7 km/s. Voyager 2, which is more than 19 billion kilometers away from the sun and is moving away at 15.4 kilometers per second, is also expected to slow down slightly to 14.9 kilometers per second in the not-so-distant future. Both Voyager 1 and 2 are passing through the latter half of their hyperbolic orbit. 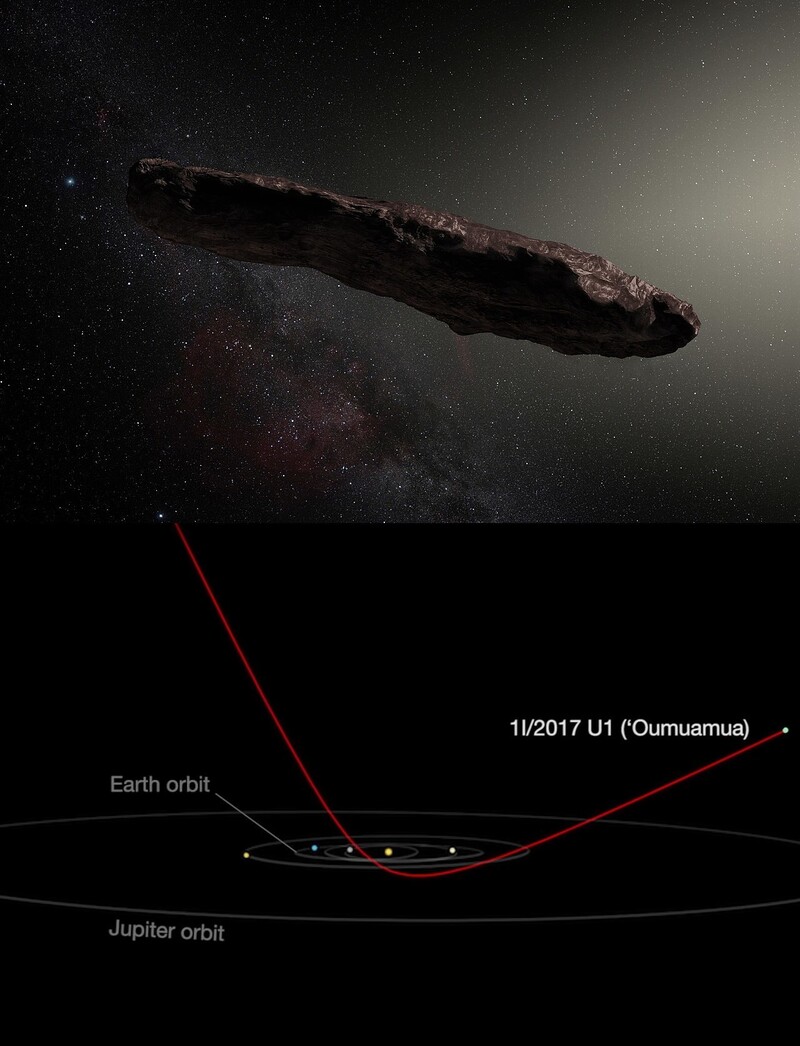 Figure 3. Imagination of Omuamua as an extraterrestrial celestial body (top) and the hyperbolic trajectory of Omuamua as it approaches and moves away from the Sun (bottom). Source: NASA

_______Orbital shape that depends on the speed of an object

Another example of flying in a hyperbolic orbit is ‘Omuamua’. This elongated celestial body flew in from outer space outside the solar system, approaching the Sun in a hyperbolic orbit and moving away from it. This means that the velocity is greater than the escape velocity of the sun’s gravity. However, it was observed that the shape of the orbit changed slightly as it accelerated while passing near the Sun.[4]
Partial hyperbolic trajectories can also be seen in gravity-assisted navigation, where space probes speed up, slow down, and change direction as they pass near planets. However, it is only when viewed from a position relatively close to the planet based on the position of the planet. In this case, if the distance from the planet is the same, the speed at which the probe approaches the planet is the same as the speed at which it moves away. However, when viewed from the sun, the space probe flies along a trajectory that is very different from the hyperbola as the orbital speed of the planet is added to the speed of the probe. Because of this, depending on how it approaches the planet, the spacecraft will speed up, slow down, or change direction. 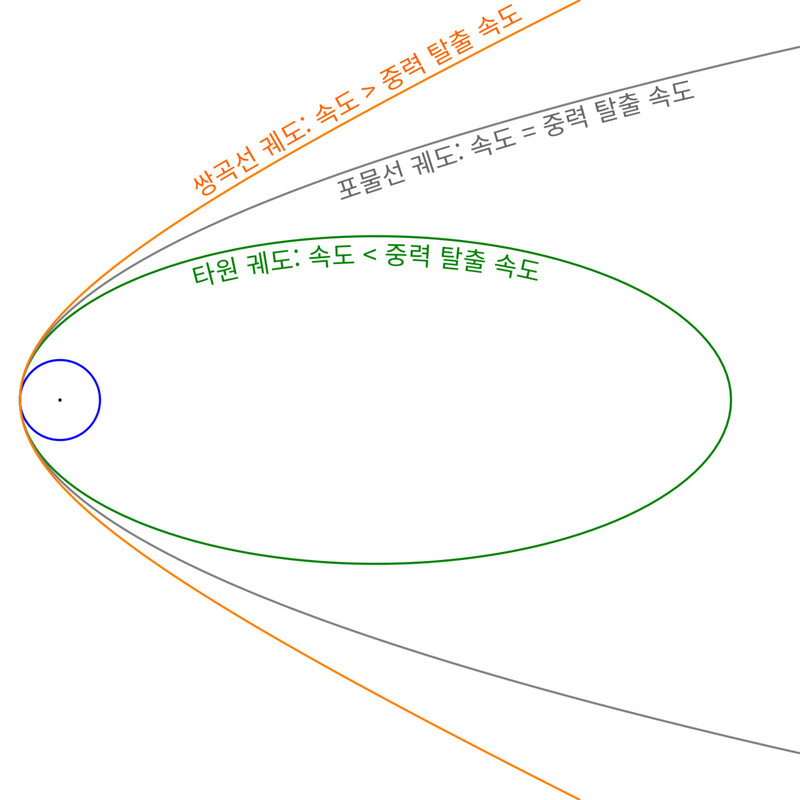 The common features of ellipse, parabola, and hyperbola shapes that appear in space flight or the movement of celestial bodies are shapes that appear in geometry taught in high school mathematics. The center of the celestial body providing gravity is at the foci of these shapes. The shape of the trajectory depends on whether the velocity of an object moving in gravity is less than, equal to, or greater than its escape velocity. The minute difference in speed results in an elliptical orbit, a parabolic orbit, or a hyperbolic orbit. This is the part where you can see that the ellipse, parabola, and hyperbola are connected to each other. Bokwon Yoon / Researcher, Georgia Institute of Technology, USA (Computational Materials Science Center, Physics)
[email protected]