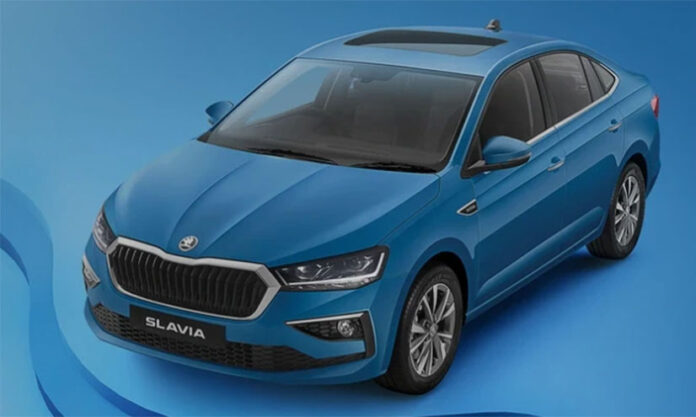 Although the love of Indian customers has now shifted away from sedans to SUVs and other segments, but it seems that Skoda wants to make Indians fall in love with sedans again and that is why the company has come up with the Slavia. Although it is based on the Skoda Rapid, it looks and feels like a segment beyond that.

What is the exact Skoda sedan? How does it perform and how comfortable is it? Recently drove Skoda Slavia and it impressed us a lot. Read on to know more about the Skoda Slavia 1.5L petrol.

Talking simply, the company does the best work in terms of design and style. It is a great sedan and looks attractive when viewed from any angle.

The Skoda Slavia has been given the modern Skoda design. The company’s signature Skoda Butterfly grille in front and chrome around it has been given. LED DRLs have been given along with LED headlight on its sides. This headlight combined with the grille gives the Slavia the signature look.

This LED headlight gives a great look to the front, it gets L-shaped Crystalline LED DRLs which gives an even more luxurious look to this sedan. It has been given circular fog lights in which halogen bulbs have been installed and inverted L-shaped element is also seen.

It gets a chrome stripe on the door handles, a sloping roofline in the Slavia which gives it a sporty look. The shark fin antenna is kept in black color which gives it an attractive look.

The first thing that grabs your attention is the LED tail light at the rear. The split tail lights are placed in an inverted L shape. Skoda’s lettering has been given on its bootlead and the bootlead has also been given a unique design. The rear bumper is big, overall the Skoda Slavia looks great.

What is a Skoda without a luxurious interior? In such a situation, the designer and engineer have gone according to the rule book. As soon as you open the door, you can feel the light weight of Skoda doors.

It has a large, dual tone interior. You immediately realize that this is a premium car and this interior says a lot about the idea of ​​Skoda. It gets a two-spoke steering wheel, which is derived from the Skoda Kushak. It has buttons for music and calls.

We drove its top spec 7-speed DSG model and the paddle shifter has been given behind the steering wheel. It has an 8-inch virtual cockpit at the rear, which can be customized according to the needs of the driver. Along with this, the driver can also change what information is shown in it.

The dashboard is made out of hard touch plastic and this is the only thing that disappoints when it comes to the interiors. It has been kept in dual tone beige and black theme, with the upper part kept in black color. The dashboard has been painted beige near both the circular AC vents.

A black stripe is seen in the dashboard. On top of this is a 10-inch touchscreen infotainment system that comes with Android Auto and Apple CarPlay, the system is easy to connect to the smartphone and its touch interface is very smooth and fast.

High quality speakers have been provided for sound and its top spec model also has a sub woofer, although the sound quality could have been a bit better.

It has a telematic solution which helps in keeping the sedan connected to the smartphone. But it doesn’t help in doing any extra work, so there are some more features to be added to the Skoda Connect.

Center AC vents are provided below the infotainment system and haptic touch panel has been provided for its controls and it offers a premium experience. The center console still feels premium and the gear lever gets a leather boot. Traction control, hill-hold control etc. have been given in this sedan. In front of the gear lever, there is a place to keep the smartphone, which also acts as a wireless charger.

Skoda cars are not only known for luxury and comfort. The company’s sedan is known for best in class performance and the Slavia has a 1.5 liter engine, this engine has been taken from the Skoda Kushak.

This 1.5 liter engine produces 148 bhp power at 5000 rpm and 250 Nm of torque at 1500 rpm. It has the option of 6-speed manual and 7-speed DSG. This engine delivers great performance and we were looking forward to driving it.

When you start it, your engine sound is not heard. But it’s not like it’s going to be smooth, it’s an extremely bursting engine. We were driving the 7-speed DSG of this sedan. Its DSG is easy and we were immediately on the open road. Its bottom-end, mid-range and top get ample grunt.

When you come to the top of the power off but the engine starts making little noise. Its engine runs smoothly in urban and stop and go traffic, but the same cannot be said for the DSG gearbox.

The DSG gearbox feels good on the open road, the shifting gear is extremely smooth. We would not hesitate to say that the 7-speed DSG is superb to drive and perfect for this 1.5 liter engine.

Shifting gears is also easy in Drive mode and it becomes forward in Sport mode and we don’t complain about it at all. Talking about the manual mode, the gear shift is similar to a manual gearbox.

Talking about the manual mode, the 6 speed manual gearbox in this sedan looks great. This gearbox makes things even better and makes the driver happy, has a light clutch and is extremely easy to operate.

Looking at the engine and gearbox, it seems that the company should have named the 1.5 as the Slavia VRS. Coming to the suspense, the steering response and handling explain why Skoda hasn’t revealed the same. The suspension is steeper and at normal speeds, the sedan slides out of potholes and out of corners with ease.

Its steering wheel gives the feel of Skoda. It is easy to drive in urban areas and stabilizes as the speed increases.

Talking about braking, the Skoda Slavia is sufficient. Its opening byte is excellent and the progression is adequate. It would have been even better if the rear drum brakes were replaced with disc brakes.

The NVH level is well under control and it never seems like the noise should have gone down. Active cylinder technology has been given in it. When it is started, koda Slavia shuts down its two cylinders whenever there is no need for firing on all four.

Overall, the Skoda Slavia 1.5 is a sedan that can make your heart beat faster.

It has been brought in three variants and five color options.

While most car makers are increasing the SUV, but in such a situation, the company is sticking to its route and has prepared a great sedan. The Skoda Slavia is very attractive and looks premium.