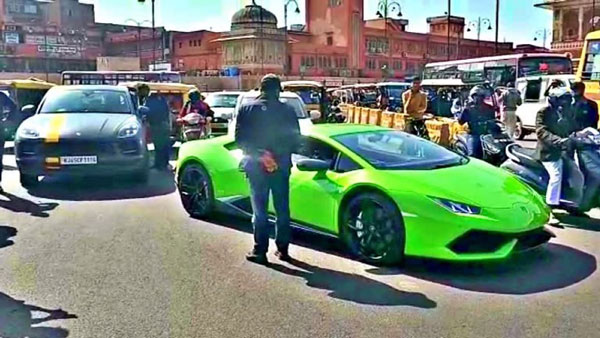 The Lamborghini Huracan had a registration plate, but only at the rear. Police issued a challan of Rs 5,000 on Vivaan Kapoor for violating traffic rules. The police stopped the car on the middle of the road, causing a huge traffic jam in the area.

Vivaan says there is no room for registration plate

The shooter argued with the police that it was an imported vehicle and there was no place to put the registration plate in front. However, the police has issued a challan as per the Indian traffic laws. The police challaned the spot and Vivaan also paid the fine on the spot.

Bought by Vivaan, the Lamborghini Huracan LP610-4 is an all-wheel-drive coupe edition of the sports car, which uses a 5.2-litre naturally aspirated V10 engine. A 7-speed dual-clutch automatic gearbox is used with this engine.

This engine produces a maximum power of 610 bhp and a maximum torque of 560 Nm. There are many Lamborghini Huracan cars on Indian roads and its ability to extend up to 45 mm makes it so practical on the roads.

The air suspension of the vehicle can add up to 45 mm of ground clearance, which is perfect for driving on rough roads and illegal speed breakers in India. Apart from this, the Lamborghini Huracan is made of carbon fiber and aluminum, which makes it extremely light and also gives strength to the body.

But as can be seen, that’s the more powerful variant, sending power to all four wheels, which makes it more expensive. The base model of the Lamborghini Huracan only gets the RWD setup. This is a used car, which was bought by Vivaan from Bangalore.