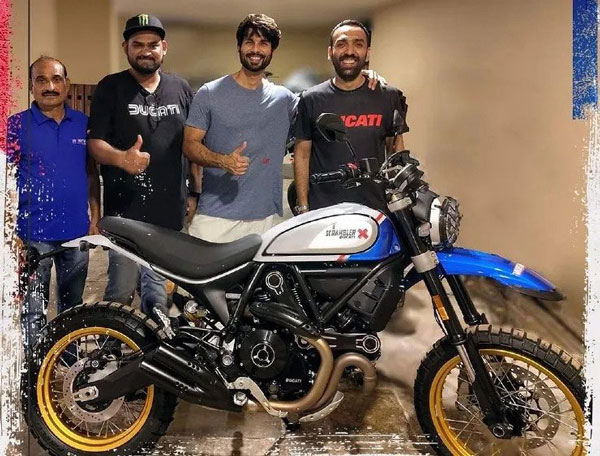 A video of Shahid Kapoor riding the same bike has been uploaded on a YouTube channel named Cars For You. In this, Shahid is seen riding a bike standing in the narrow streets of Bandra. He is wearing a helmet, due to which his face is not visible at the beginning of the video.

However, soon he parks the bike and the cameraman requests him to click the photo without a helmet so that Shahid’s face can be seen. After this, he is also seen posing with a group of people. During this he enters the cafe giving another picture to the paparazzi.

Let us tell you that recently, the Bollywood actor has bought a new Ducati Scrambler Desert Sled motorcycle, whose starting price is Rs 12.09 lakh, ex-showroom. Shahid bought it from the Infinity Ducati showroom and also shared the picture of the motorcycle through his Instagram account.

If you look at the bike, it will be known that Shahid’s Ducati motorcycle comes with a dual-tone sparkling blue and white paint scheme. This is the new 2022 model of the Scrambler Desert Sled that has been introduced in new design elements and colours. It gets longer suspension than the normal scrambler model.

Apart from this, the bike also gets 200 mm of travel with a level-adjustable suspension setup. Along with commuting, off-roading can also be done with this bike. That is, it can be easily driven even on rocky and sandy roads. The Ducati Scrambler Desert Sled is powered by an 803 cc L-twin engine that generates a maximum power of 75 Bhp and 68 Nm of torque.

Apart from this, the actor has a BMW R 1250 GS, cruiser bike Harley-Davidson Fatboy in his garage. Not only bikes, Shahid Kapoor also has many luxury cars in his garage. This includes luxury cars like Jaguar XKR-S, Range Rover Vogue, Mercedes-AMG S 400, Porsche Cayenne GTS and Mercedes ML-Class.